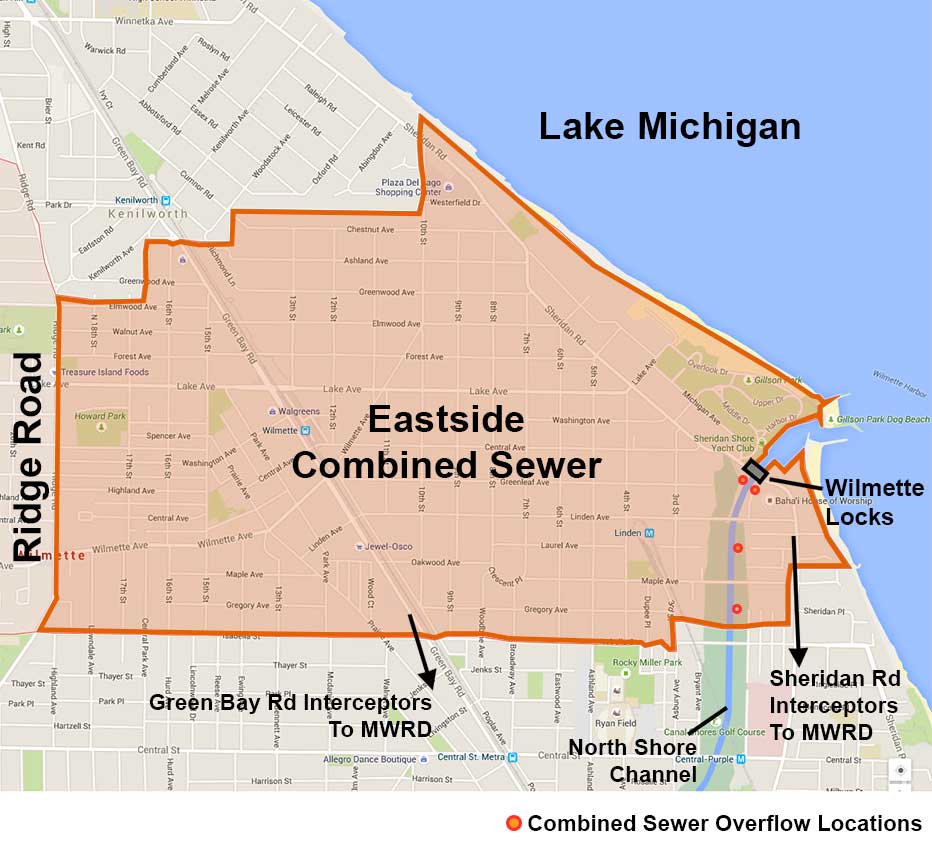 Find out about regulations and restrictions for combined sewers:

As explained in the Village of Wilmette, Public Works Dept., 2014 Annual Report (p71):

In the mid-1990’s, the Village constructed various relief sewers, upsized existing sewers and installed storm water berms throughout the combined sewer area. Through the use of restrictors on the sewer inlets and street berms, the streets and parkways serve as detention areas. Rather than inundate the sewer system with surface water, the on-street detention holds the water until the sewer system can accept it. When the existing combined sewers reach capacity they overflow to the relief sewers strategically installed in the system. The relief system only functions during large storm events and drains to the MWRDGC Tunnel and Reservoir Project (TARP) commonly referred to as “The Deep Tunnel”. When the TARP system reaches capacity and is closed by the MWRDGC, the Village relief sewer system overflows into the North Shore Channel outfall located near the TARP connection. This occurrence is known as a Combined Sewer Overflow (CSO).

After the large trunk sewers were installed in the 1990’s the Village ceased construction in 1999. In August, 2001 and again in August, 2002, the Village experienced intense storm events. The 2001 storm measured 4.11” at the Water Plant; the 2002 storm measured 5.53”. They were categorized as 100-year and 50-year storm events, respectively. Data on sewer back-ups was gathered after these rain events and compared to similar rain events in the late 1980’s. The results conclude that the construction of relief sewers and on-street detention have dramatically reduced the frequency and severity of basement back-ups in the combination system. In 2004, the Village Board supported the continuation of the relief sewer program. Rather than approve one large, multi-million dollar project, the relief sewers are being installed in conjunction with our road program over several years. It is anticipated that the relief sewer project will be completed in 2018.