I expected to be able to snooze through last week’s Wilmette Village Board meeting, since “sewers” and “flooding” weren’t on the agenda. But midway through, I was jolted awake…

A seemingly trivial agenda item (a request for a zoning variance for new construction on a teardown site) turned into a long and tangled debate about zoning, basement flooding, the water table–even the role of trees in flood prevention.

The emotional center of the meeting came during comments from neighbors who live next to the teardown site. They joked about losing their “man cave” due to repeated basement flooding, but they were obviously extremely frustrated. They said the neighborhood had become “teardown alley,” with oversized development making flooding worse, so they opposed the variance. 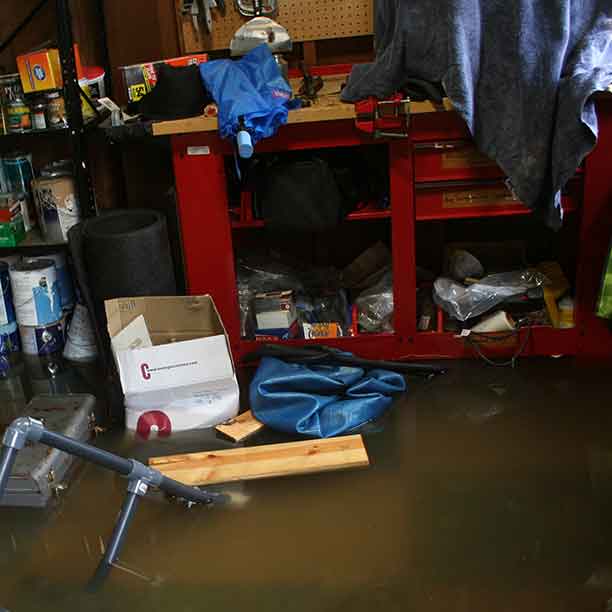 Here’s what happens when a basement floods…

The new owners of 914 Yale Street planned to tear down the existing home and replace it with a bigger split-level. However, they noticed a “high water line” in the old basement, and several neighbors confirmed that the neighborhood flooded often.

Consulting engineers took a core soil sample and reported that the new basement floor would be below the water table. They recommended raising the basement above the water table. This would keep the basement drier, while reducing dependency on a sump pump for drainage. The redesigned home would also include a taller two-story section, built on a slab/crawl space to reduce flooding issues. 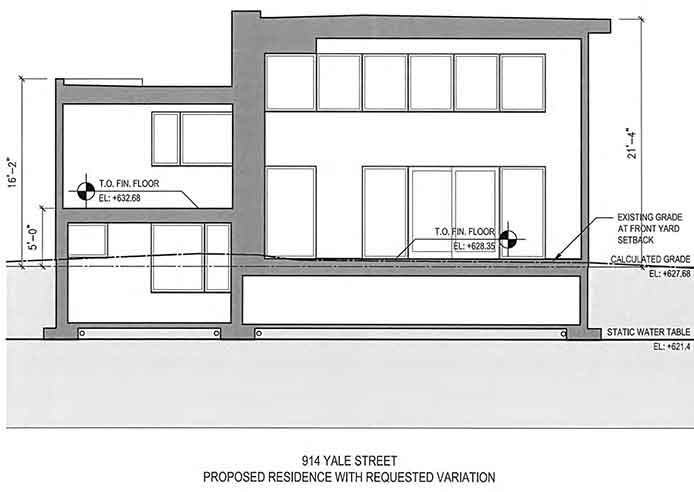 The new owners said this design solution might also help reduce flooding in the neighborhood (for example, by reducing water going into storm sewers).

So why not just use the elevated basement and slab design?

Here’s where it gets tricky…

Wilmette zoning restricts total floor area. Basements are not counted toward the total, so, typically, including a finished basement is an easy way to add floor space without adding to the calculation for total floor area.

In this case, however, raising the basement would disqualify it from approved “basement” status, pushing the project about 900 sf over the floor area limit.

In other words, in order to build big, while also building smart, the new owners would need a zoning variance.

I was ready to wrap it up–case analyzed! But then I consulted my brother, Lee Stevens, a home building contractor in Colorado. He told me, “Not so fast…”

He explained that even if the new owners built above the seasonal high water table, and did everything they could to prevent flooding, there might still be a problem during an extremely intense (but rare) storm.

My brother also circled back to the “core” of the case: frequent neighborhood flooding.

“Look,” he told me, “If you really want to understand the whole situation, then what you need is some sophisticated hydrologic modeling for the area.” If analysis shows that the storm sewers do not have the capacity to carry away typical levels of runoff, then regardless of what the homeowners do, there’s going to be systemic flooding issues.

All the data point toward one main conclusion:

CBBEL determined that the majority of the storm sewers throughout the western portion of the Village have a 2-year level of service or 2-year capacity. Therefore, the Village’s existing storm sewer system can convey runoff from less than 2 inches of rain over a 3-hour period before the storm sewer begins to surcharge and stormwater begins to collect on the streets in the lowest areas.

The separate storm sewer system capacity is the limiting factor.

The study concludes that various initiatives can help prevent basement flooding, but to resolve the problem, the separate storm sewer capacity must be increased.

So what about the request for a zoning variance? At the end of the meeting, as the last stop in the appeal process, the Wilmette Village Board voted not to approve the variance.

Board members who voted “no” said the variance was not needed to prevent “hardship.” Also, the potential neighborhood impact was uncertain, and changes to deal with the water table should be implemented in the zoning ordinance, not via individual variances.

Now it’s back to the drawing board for the new home owners. But it’s up to all of us to learn more about potential storm sewer improvements, so we can advocate for solutions that work throughout the village.

For details on the 914 Yale Street zoning variance request:
Meeting Agenda, Zoning Board of Appeals (May 6, 2015)

Meeting Agenda, Zoning Board of Appeals (June 3, 2015)
(Note: These supporting documents reflect the original request for 2′ basement elevation, which was revised to 1′, but still rejected.)

Wilmette Zoning Ordinance & Zoning Map
(This case is based on zoning for: “R1-D Single Family Detached”)