While talking to civil engineers to research this blog–and even when talking to plumbers about sewer issues at my house–they almost always launch into a spiel that goes something like this:

Wilmette’s sewers are old, with sections dating back to the 1920s and ’50s. The village has changed a lot since the first sewer lines were installed–there are more houses, more stores, more parking lots, more paved streets. Realistically, if you want the same level of service as “back in the day,” you’re gonna have to make some major investments in maintenance and upgrades.

I’m a relatively recent arrival (having moved here in 2002), and can’t really visualize Wilmette’s history. So I took a quick trip to the Wilmette Historical Museum to find out more…

Westside When the First Sewers Were Built

With help from the historians, I found this photo of westside Wilmette, taken in 1926, the year Wilmette made plans for the first westside water and sewer systems: 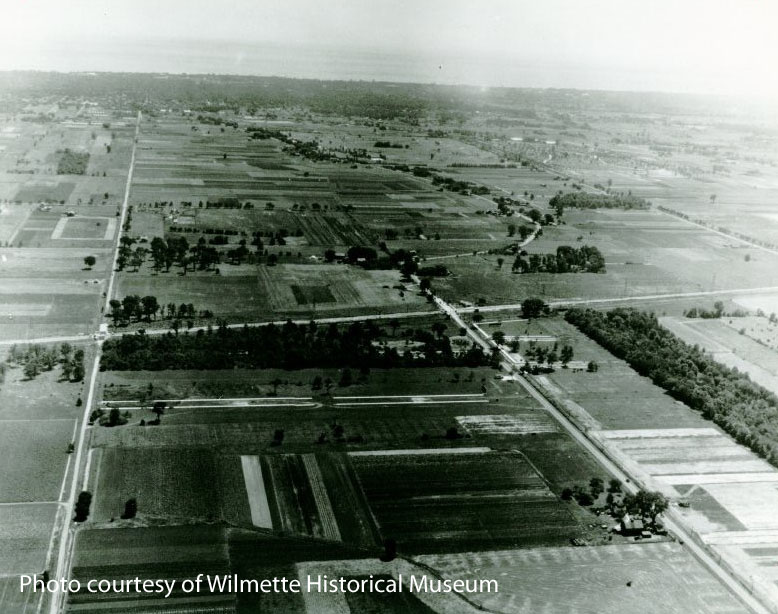 View of westside Wilmette farm fields in 1926, looking east toward Lake Michigan, back when homes had their own water/sewer systems.

The next photo is from the 1930s, showing the westside right after the first water and sewer lines were installed. The project covered a total of 700 acres west of Ridge Road, extending from Wilmette Ave in the south, to the Indian Hills golf course in the north.

As you can see, the westside still had a lot of open fields: 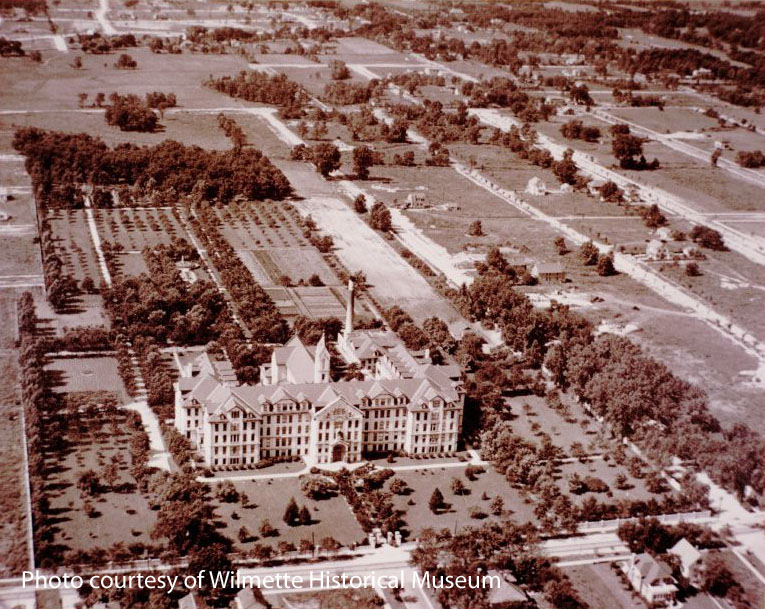 Photo of Mallinckrodt (center), looking northwest from Ridge Road (bottom), circa 1930s, after the first westside sewers were built.

Now check out an aerial view of the same location today. I was surprised to find out that some of the original 1920s sewer pipes are still in service in this area: 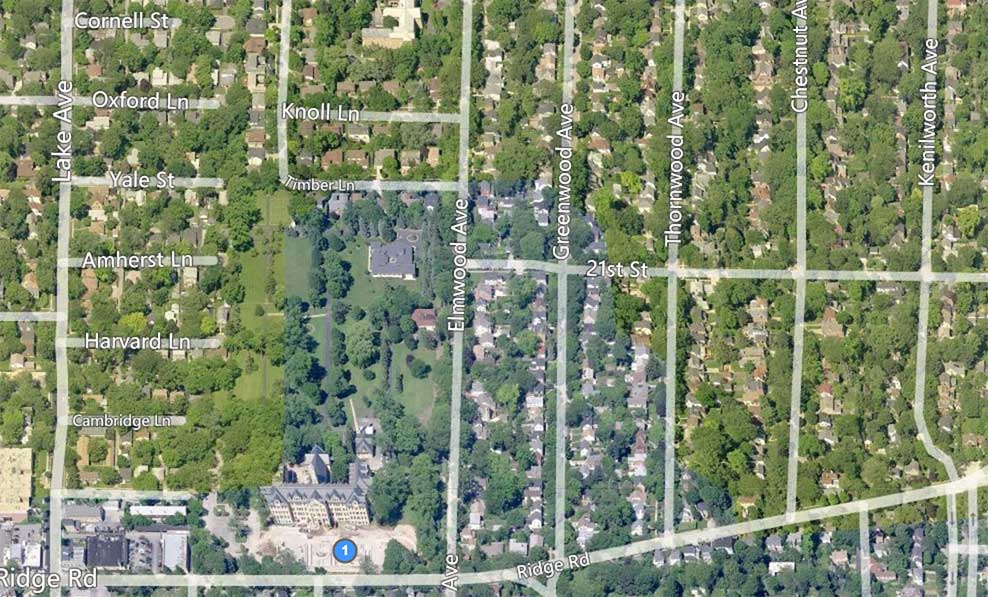 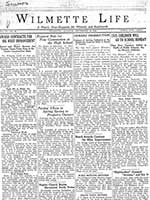 According to the article, it was hard to find the right construction company for the project because:

…this is what is termed a “wet job,” that is, it is a district underlaid with vast quantities of shifting sand, which every firm engaged in this sort of work is not equipped to handle.

The winning construction bid for the project came in at $177,158 (equivalent to $2,388,510 today), paid for using a “special assessment.” The article also notes that numerous “high grade development” projects had long been “awaiting only the coming of these necessary underground improvements.”

In other words, the westside couldn’t be developed until the village invested in infrastructure to provide water and sewer services.

The sewers were mostly completed by the 1950s, but construction continued throughout the post-WWII boom.

A friend who grew up in Wilmette has some fun memories from this time period, when farmland transitioned to modern suburbia. For example, she remembers swimming in the westside swimming pool in the ’60s, and being able to look over the fence to watch chickens strutting around the adjacent farm.

The next photo provides an aerial view of the westside at that time: 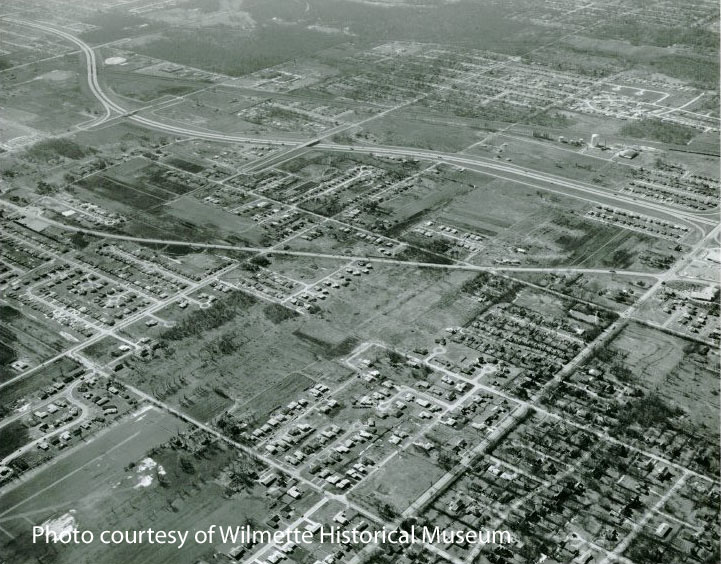 And here is modern Wilmette: 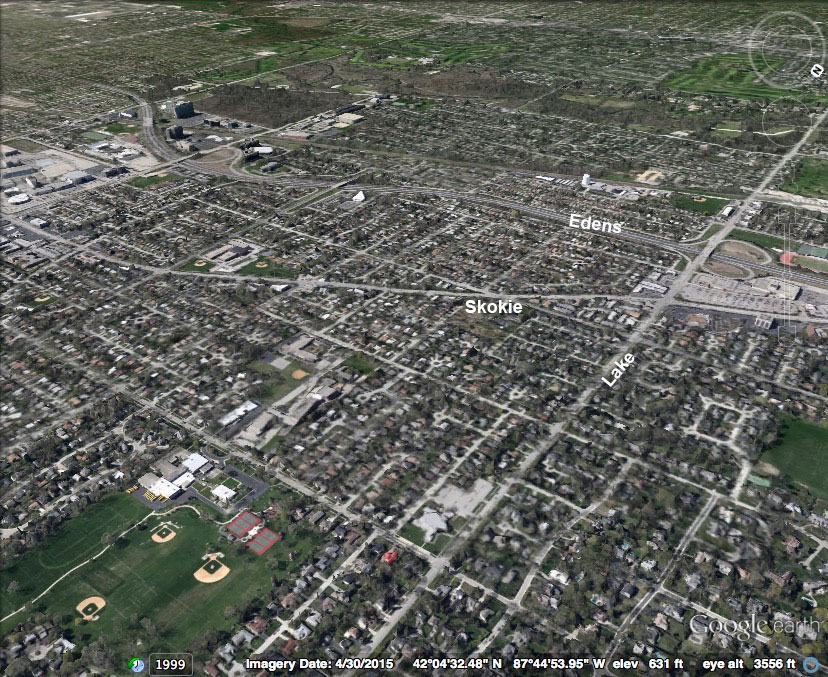 Similar view of westside Wilmette in 2015.

After my “field trip,” I have a better sense of the changes in westside Wilmette, since the first sewers were built years ago.

Westside lots have been subdivided and developed, mini-malls built, a hotel added, and parking lots and alleys paved over.

Through all this, infrastructure has been added in a piecemeal process, sometimes in advance of development, sometimes to resolve pressing problems.

It’s not surprising that, just to get the same level of service as “back in the day,” Wilmette needs to make major investments in sewer maintenance and upgrades.