I happened to pass through the Skokie/Hibbard intersection just as they were taking down the construction cones on Wednesday. Unfortunately, due to the State of Illinois budget mess, the project got off to a late start, so we’ll have to wait till spring for project completion. Through some AWSM teamwork, we’ve learned some more about this intersection, and about storm sewer requirements for all Wilmette roadways.

First, the village is aware that the incomplete project could cause issues during spring rains, and will try to ensure that steps are taken to minimize flooding.

Second, we noticed that the sewers (shown in the pic) look huge–that’s because they are.

Hibbard is partly a county road (in the section south of Skokie), while Skokie and the northern section of Hibbard are state roads. So any new road construction or road reconstruction must comply with drainage standards set by the Illinois Department of Transportation (IDOT).

In the case of Hibbard/Skokie, there’s a complex range of standards, ranging from 10-year to 50-year protection, and even some consideration at 100-year storm level.

To meet these standards, the project includes 1,600 linear feet of new storm sewer pipe (12- to 30-inch diameter), 50 drainage structures/manholes, and replacements for two culverts (that is, channels to direct water flow under the roadway).

The stormwater from these new sewers will flow north, into the existing storm sewer trunk — that’s the big pipe on Lake Avenue that flows to the pump station for drainage into the river.

Here’s the problem: the storm trunk is currently a bottleneck, backing up even during 2-year storms. Yet the new sewer pipes are mostly designed to handle 10-year storm flows. Clearly, connecting the new pipes would overwhelm the old system.

In this case, the engineers super-sized the storm sewer pipes at the intersection.

Essentially, the new storm sewer pipes will function as on-site storage tanks, with restrictors at the downstream connections, to throttle down the flow into the old, undersized storm sewers.

Learning about Hibbard/Skokie got us curious about IDOT standards for roadways throughout the rest of the westside.

State and county roads (such as Lake, Skokie, parts of Glenview and Ridge) are clearly subject to IDOT rules. Other westside Wilmette roadways are managed by our local village, but IDOT drainage standards would apply, at least to most of the main streets (such as Locust, Hunter, Old Glenview, Wilmette, and Laramie), which are eligible for state/federal funding. In general, the IDOT standards for these local streets would require, at a minimum, drainage to clear runoff from 10-year storms.

However, after further investigation, the situation is somewhat murky. Theoretically, IDOT standards are enforced whenever the village applies for state or federal funding and road reconstruction permits. But as a practical matter, this is Illinois, I guess, and apparently all bets are off…

At the moment, the Village of Wilmette has no overall plan to bring westside street drainage up to the minimum 10-year storm standards. The only plan (if you can call it a plan), has been to continue maintaining westside storm sewers in their current undersized configuration, since minimal maintenance is what’s required by the EPA to maintain approval for the storm sewer permit.

Could Westside Street Drainage Be Improved?

Based on the westside storm sewer studies, the only viable solution for upgrading to 10-storm protection throughout the entire westside is Option 1 Relief Sewers. That’s because Option 1 includes a new storm trunk, with a network of sewer pipes fully sized to clear 10-year storm flows from the entire drainage area. 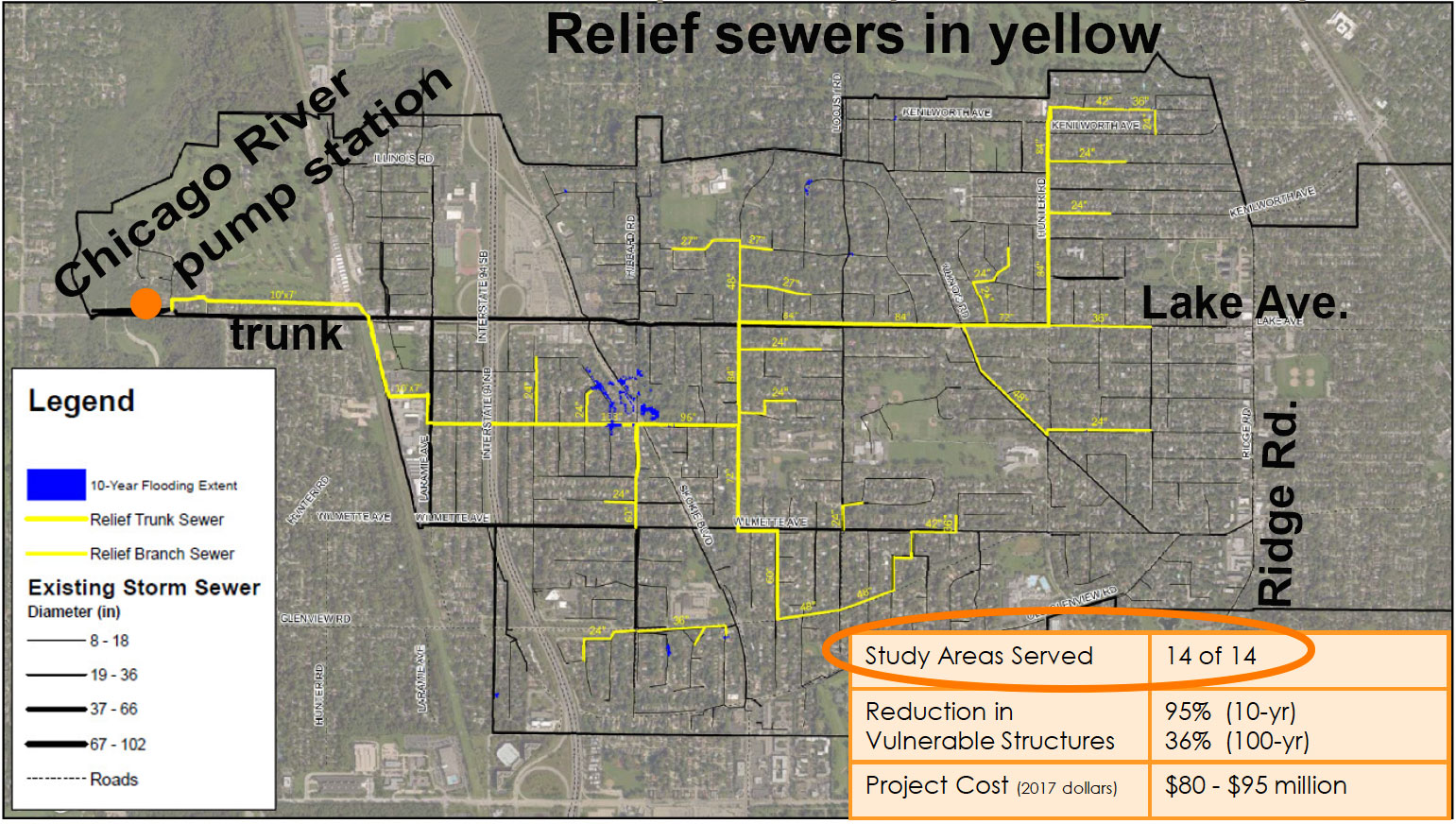 Without Option 1 and proper support for drainage, it might be possible (but expensive) to install larger storm sewer pipes on some streets to increase local stormwater detention, thus raising the standard of service. But, again, even this localized and incomplete fix appears to be a matter of choice for the village.

We all pay into MFT funds every time we stop at the gas pump. Wilmette’s MFT allocation is strictly based on population (to yield about $700K-$800K annually). Currently, Wilmette is using the funds for road repaving. In terms of help with storm sewers, the funds can only be used to upgrade storm sewers as part of a road improvement project, not as a separate stand-alone project.

It appears that the Illinois Transportation Enhancement Program (ITEP) could provide up to $2M of MFT funding per project.

Here’s another link on funding for roads in Illinois.

Examples of Successful Projects: To see what happens when you’ve got the downstream storm trunk drainage in place for new drainage projects, look no further than the Central Avenue road reconstruction project, on the eastside of Wilmette. Each additional eastside roadway drainage project connects into the new eastside relief storm trunk and TARP system.