Wilmette is part of the Metropolitan Water Reclamation District (MWRD) of Greater Chicago. And, I’ve realized, things get complicated when you share a sewer system with 9.5 million people!

Just to add to the complexity, the whole system ultimately flows into the Chicago River. And that river, which should drain northeast into Lake Michigan, has been re-engineered through a system of locks and pumping stations, reversing its direction, to carry treated waste water south, away from the lake.

With this as the backdrop, here’s my “shaggy dog” story for the last week of a rainy spring season in Wilmette…

Sunday: Fun On the Beach

During a break from the rain on Sunday, we headed to the Wilmette beach. The water was beautiful, flat, and clear–a little cold for us, but great for our dog Ellie: 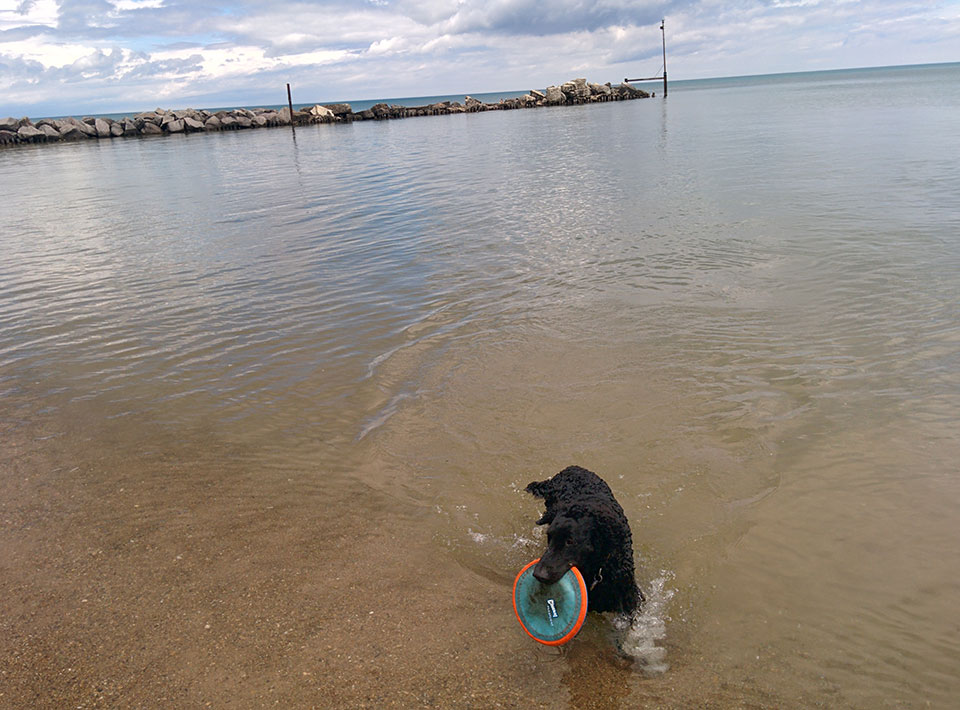 On Monday, the day of the big Blackhawks game, it poured rain. June had started off pretty wet, so I double-checked the basement and sump pump. (All good!) Then I went online to find out: istheresewageinthechicagoriver.com

The answer from the Open City app was “Yes.” Data supplied by the MWRD indicated that sewage had already started overflowing into the Chicago River, even before Monday’s rain.

Digging a little deeper, I found an MWRD report for the previous 24 hours: 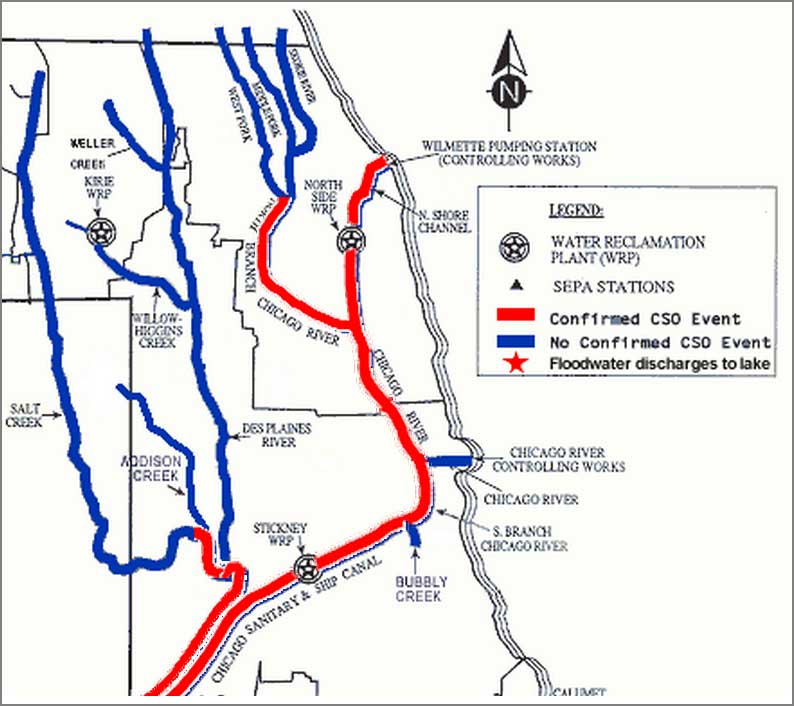 Red lines on the map mark areas affected by combined sewer overflows (CSOs), which are as bad as they sound.

Old style combined sewers, including the system that serves Wilmette’s east side, are designed to drain both runoff (from storms) and domestic sewage (from toilets, sinks, etc.), and transport it all to Water Reclamation Plants (WRPs) for treatment.

During heavy rainfall, combined sewers are inundated by storm runoff. Eventually, MWRD treatment plants can’t keep up, and the tunnel and reservoir storage becomes full. Then sewage can back up into basements of homes and businesses connected to the combined sewers (that is, east of Ridge Road, in Wilmette).

To relieve pressure and prevent sewage backups, the combined sewers in Greater Chicago are allowed to overflow into local rivers, at a number of outfalls that the MWRD monitors. Based on the map, it appeared that Wilmette’s own combined sewer system had overflowed into the North Shore Channel (top right).

While running errands later in the day Monday, I listened to tornado alerts on the radio, watched the downpour, and decided to check out the Wilmette locks, located just west of the dog beach in the first photo: 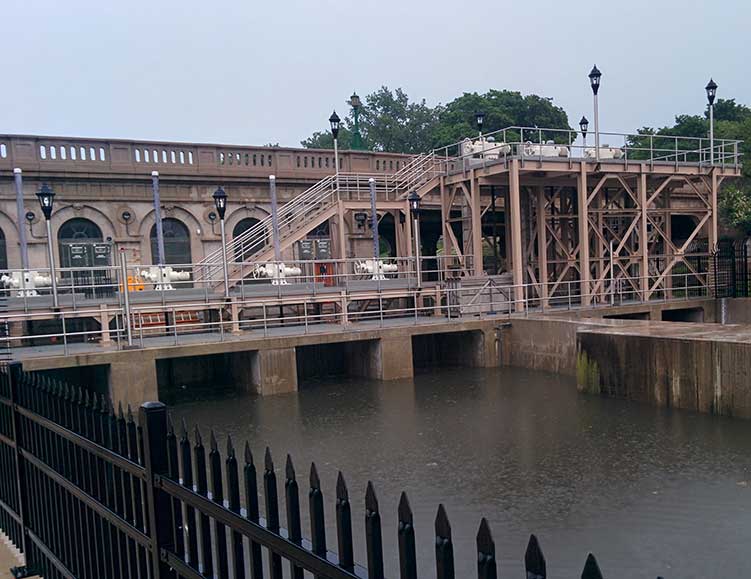 The locks and pumping station separate the North Shore Channel from the lake, and force the channel to flow south into the main Chicago River. But to my untrained eye, the water level looked high. As the level rises, there’s a risk of flooding along the banks. And if the channel rises above the combined sewer outfalls, sewage could back up into the basements of homes connected to the combined sewers.

Shortly before the Blackhawks game started, I checked the MWRD Facebook page and found the announcement: “Gates opened at Lake Michigan.” When the MWRD opened the Wilmette locks, rainwater and sewage flowed into Wilmette harbor and Lake Michigan.

The morning after the locks were opened, the beach was closed: 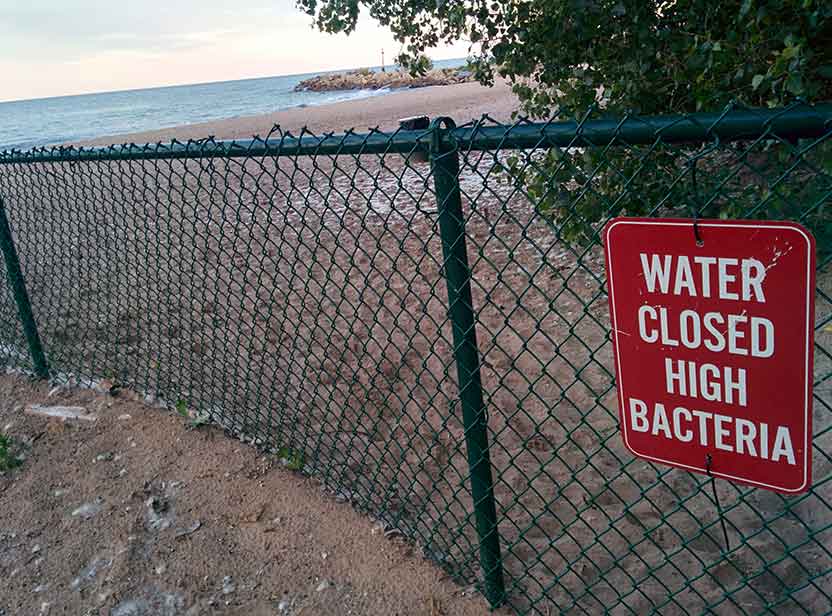 For the moment, our shaggy dog would have to stay on high ground.

So far this year, there have been 10 days of CSOs. Last year had a total of 41 CSO days.

Combined sewers are likely to overflow because they’re designed to clear away stormwater, but the aging systems also take in extra stormwater due to infiltration and inflow.