“Basically, this is an outgrowth of the initial study,” said Trustee Julie Wolf, Chair of the Municipal Services Committee, referring to the initial Separate Storm Sewer System Stormwater Management Report. The initial report, released in January 2015, included a proposal for a $75 million upgrade to prevent flooding, which caused “sticker shock” according to Trustee Wolf, and the board decided to keep searching for cheaper alternatives.

Focus of the Studies

Both the January report and the new studies are focused on improvements for Wilmette’s separate storm sewer system, which handles runoff after rainstorms in the area west of Ridge Road. The system functions independently from the sanitary sewer that removes unclean wastewater from toilets, sinks, etc. on the west side.

(Note that east Wilmette has a combined sewer that mixes runoff with waste water.)

For the January storm sewer report, Christopher B. Burke Engineering used hydraulic modeling to analyze Wilmette flooding. The goal was to identify improvements to prevent flooding during storms with 4.47 inches of rainfall within 24 hours, an intensity expected only once every 10 years.

The study found that west Wilmette floods during 10-year rain events not because the storm-water pump station lacks capacity (at 585 cubic feet per second), and not because the two outfalls lack capacity to convey storm water to destination waterways (at 980 cfs).

Instead, the current limiting factor is the capacity of the storm sewer lines (at 300 cfs). There are not enough pipes, of large enough diameter, to clear all the water from the west side of the village.

The main recommendation of the January report is to prevent 10-year flooding by directly attacking the primary problem:

Pros: Resolves the main issue identified in the study (that is, the lack of sewer line capacity). Prevents flooding during 10-year rain events.

The January report described two additional options that either do not directly tackle the main bottleneck (storm sewer capacity), or do not fully resolve 10-year flooding:

Cons: Not much cheaper than fully upgrading the sewer lines.

Cons: Not a “10-year solution” for all homes; flooding would still occur.

The January storm sewer study included a chart comparing the existing system with the #1 recommendation (highlighted in red) and alternative options: 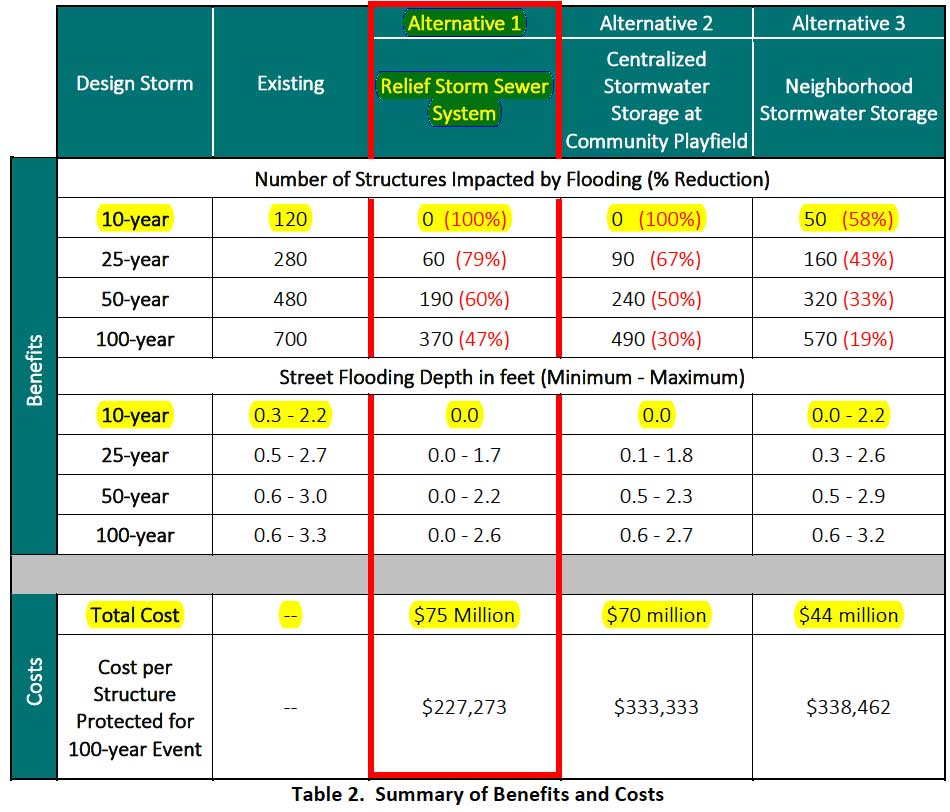 In a quest to avoid a $75 million price tag, the board authorized payment of $56,300 to Burke Engineering to evaluate a number of lower-cost alternatives. None of these alternatives will resolve 10-year flooding events for the entire west side. However, Option 3 could be effective in a small locale.

Cons: During 10-year rain events, water would cover some roads, parkways, and sidewalks.

Pros: May cost less than the initial proposal for a below-ground tank.

Cons: May still be costly, might not solve 10-year rain events, and makes fields unusable during heavy rainfall.

Cons: Requires coordination; does not resolve the rest of Wilmette’s flooding issues.

Next Steps At End of June

The new studies (paid for using bonds issued by the village for work on sewers and flooding) should be completed by the end of June. After that, the Wilmette village engineer, the Municipal Services Committee, and the Wilmette Village Board will decide which, if any, of the improvements should be implemented.