On July 23, Wilmette was hit by a torrential downpour.

It had been a hot day, the air sticky with humidity. Late in the afternoon, the sky darkened, the storm siren wailed, then wind and rain hit…

Branches blew off trees and bounced across lawns. Water hammered the roof, poured over the gutters, and quickly filled the street. In less than an hour, the storm sewers were surcharging, and water was flowing up, across our yard. 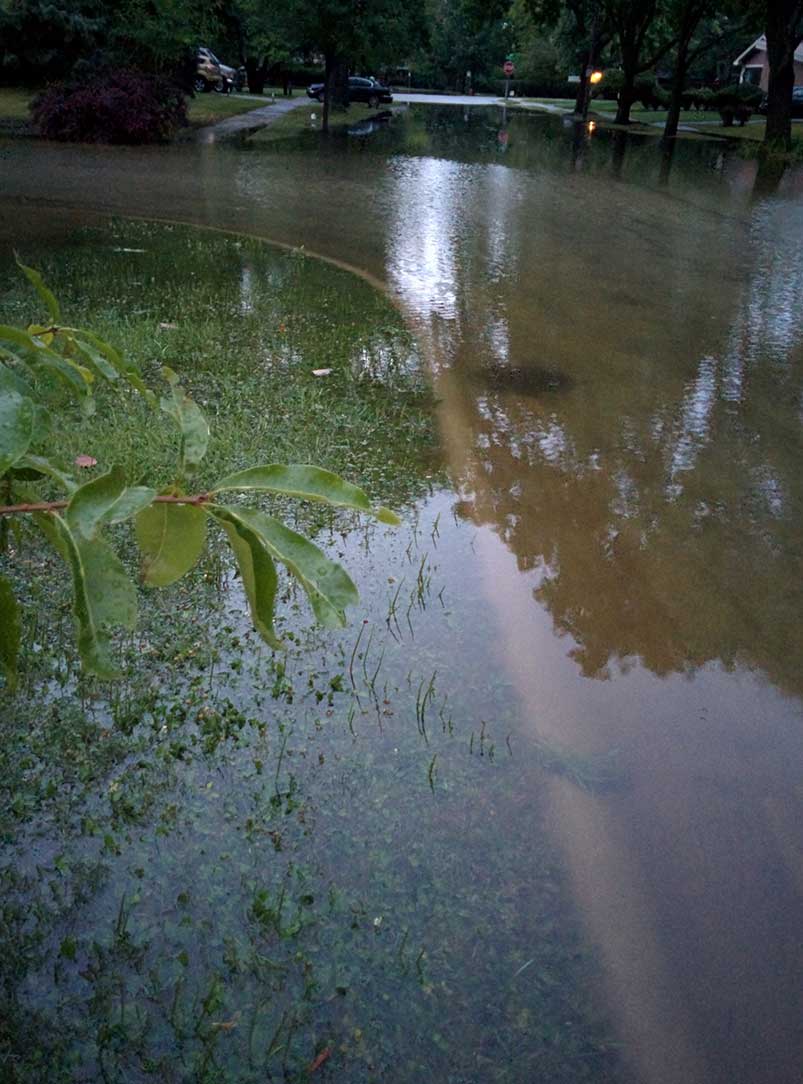 We ran around the house checking our latest round of flood protection. Everything was holding…Yes!!!

Then I grabbed a flashlight to check the crawlspace. The crawlspace was dry when we bought our house a decade ago, but recently we had noticed signs of moisture. I flicked a light along the foundation walls, and there it was… Water was gurgling into the crawlspace like it was a bathtub being filled.

Suddenly, a huge bolt of lightning struck outside with a percussive thump, and a car alarm went off. 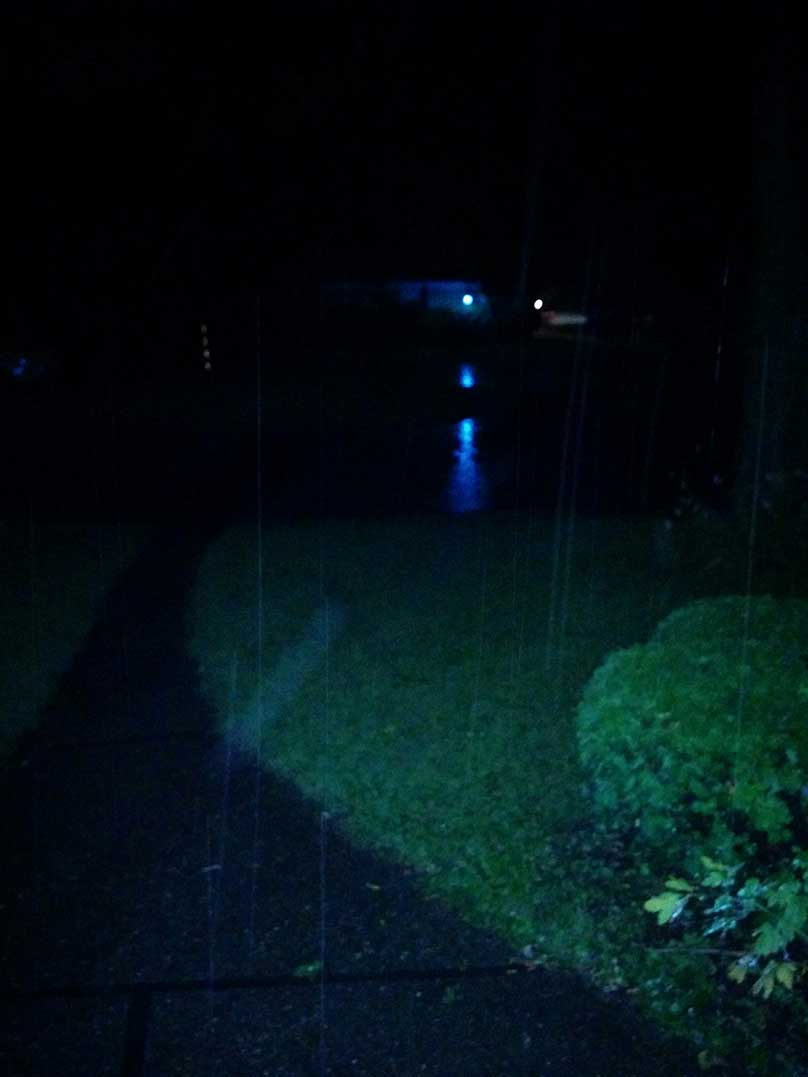 Then the power shut down, our lights went dark, and the sump pump at the back stairwell went quiet.

The Reality of Climate Change for Westside Wilmette

“Now what?” That’s the 64-million-dollar question.

Or actually, it’s the 77-million-dollar question. That’s the price tag for the Option 1: Storm Sewer Improvement, which the Wilmette Village Board debated at a September meeting.

The meeting got off to a slow start. The village board, staff, and an engineer representing Christopher B. Burke Engineering (the developer of the Option 1 Storm Sewer proposal) all took time to rehash facts and figures. 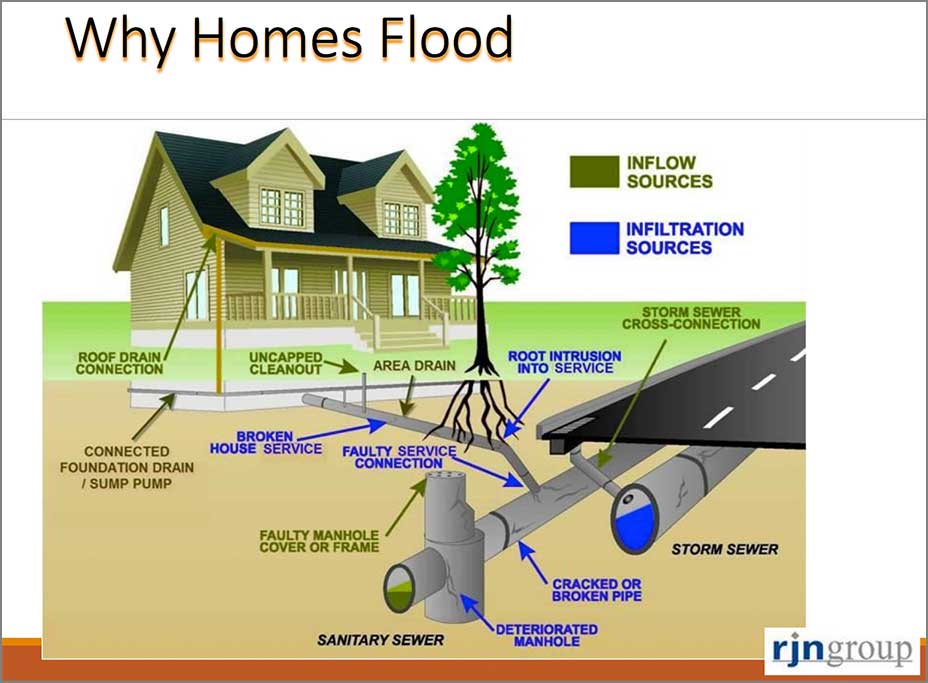 As a result, public comment was pushed late into the evening, and the 50 to 60 residents who came to lobby for a solution became visibly–and vocally–frustrated.

When they finally spoke, homeowners described the consequences of westside flooding:

The stories told by older residents were especially poignant. As long-time residents, they’ve paid taxes for decades to improve Wilmette schools and support village services. Now they’re afraid they’ll have to leave the community, if they can’t handle increasingly severe flood damage by themselves.

If anything, losses due to westside flooding are probably underestimated. As one resident pointed out, many homeowners don’t report flooding because they’re afraid of hurting their home resale value. This is a realistic fear.

According to a study by the Center for Neighborhood Technology, wet basements damaged by repeated flooding can, over time, lower property values, by an average of 10-25 percent.

Consider what this means for Wilmette. Assume that the median Wilmette home value is $641,200, and the average flood devaluation ranges from $64,120 to $160,300 per property. Studies have identified about 700 westside homes subject to repeated flooding. Extrapolating from these numbers, we could expect a total loss in westside property value of $44,884,000 to $112,210,000.

That is not a trivial loss for Wilmette.

In addition, the Center for Neighborhood Technology has collected data from insurance companies and Cook County residents to estimate the average direct losses from flooding. For example, structural damage averages $7,769 per flooded property. Multiply that by 700 homes, and you get a total of $5,438,300 in damages for westside Wilmette floods.

One big surprise at the September meeting was an exchange between the board and the engineering consultant, Darren Olson, who represented Christopher B. Burke Engineering.

Wilmette Village President Bob Bielinski finally asked him a direct question: Is a comprehensive storm sewer improvement, which includes a new storm trunk and sewer lines, a prerequisite for other localized stormwater solutions?

I was shocked. Engineers never say “absolutely” about anything! But this meeting made it clear that localized options (like stormwater detention systems, rain gardens, and individual homeowner floodproofing) have limited capacity.

Small changes can enhance, but not replace, a comprehensive storm sewer system.

One trustee asked why the village couldn’t ask westside property owners to install their own floodproofing solutions (the audience collectively groaned…).

Engineers have been explaining the situation since 2009. The fact is that westside homeowners cannot floodproof homes by themselves.

Ultimately, there’s simply too much water with no place to go.

First the Deluge, then… More Meetings?

The July 23 rainstorm was admittedly the worst of the summer, dumping a total of 6.05 inches of rain in 8 hours. But although experts called it a “100-year” rain event (with a 1 percent chance of occurring each year), we’ve had five of these so-called “100-year” rain events in the past 35 years. And our westside storm sewers cannot even clear a so-called “2-year” rainfall.

The fact is that the westside storm sewers, installed 50 to almost 100 years ago, in mostly undeveloped farmland, are completely inadequate for today’s level of rainfall, and today’s urban development.

Now is the time for action.

But it appears the Wilmette Village Board has other plans for the next sewer and planning meeting, scheduled for this week Thursday, October 20.

According to the information packet, the goal is to:

• Continue discussion of $77M Stormwater
Improvement Project
• Current Decision Point: Determine whether to engage a third
party engineering firm to conduct a value-engineering review to
validate the results, analysis and cost estimates of the CBBEL
report

Read the study by the Center for Neighborhood Technology (CNT), The Prevalence and Cost of Urban Flooding: A Case Study of Cook County Illinois (May 2014), or skim through a summary.

Prepare for the October 20, Wilmette Long-Term Capital Planning Meeting (Sewers), to be held at 7pm in the Village Hall Council Chambers, by reviewing the Packet for 2016 Capital Planning Workshop.

Review the 2010 Separate Storm Sewer Study by MWH Americas. One of the recommendations is to install a second storm sewer trunk along Lake Avenue to fully utilize the pumping station and outflow at the North Branch of the Chicago River (p9).