When I lived in New Jersey, I heard a somewhat crude joke about the Passaic, a river that simultaneously serves as a source of public drinking water, and a destination for treated sewage.

The joke was that you could have your beer at night, and then have it again for your coffee in the morning!

What brought this joke back to mind was a river cruise…

Taking advantage of a sunny August day, I invited my mother and son to join me on a Chicago Architecture Foundation River Cruise.

Of course, since it was an architecture tour, our well-informed and entertaining tour guide focused on the towers built along the banks of the Chicago River, in the heart of the city. He pointed out architectural details, created a timeline of styles, and quizzed us on the names of architects and famous buildings.

We checked out the Trump Tower (with the “T” hidden in the shadows):

We looked at old bridges and the historic Wrigley Building, built by the chewing gum magnate: 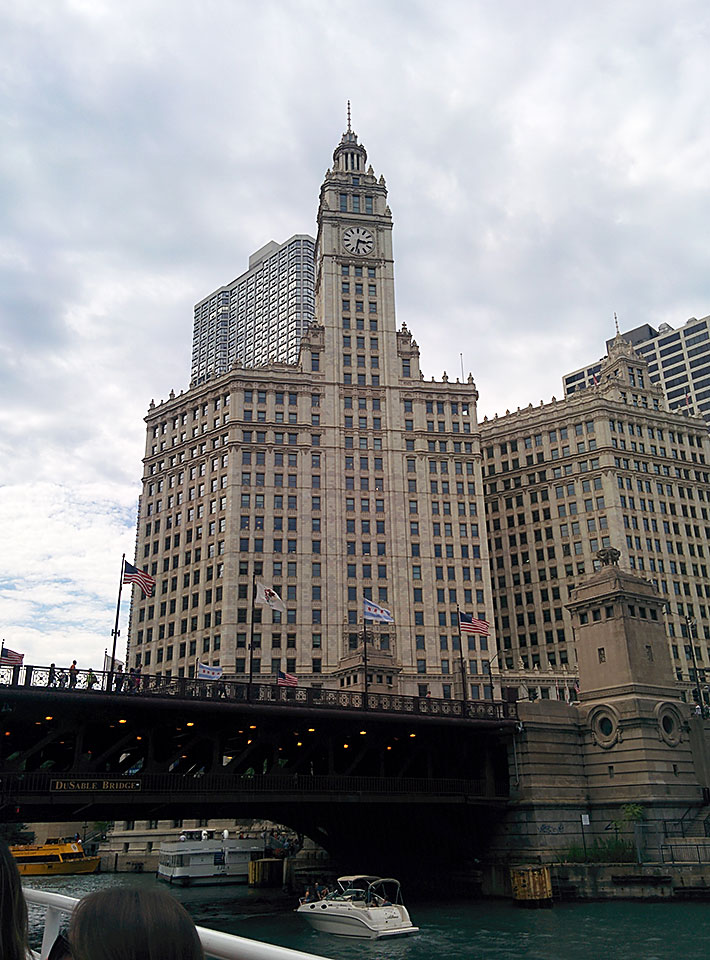 And some modern stuff: 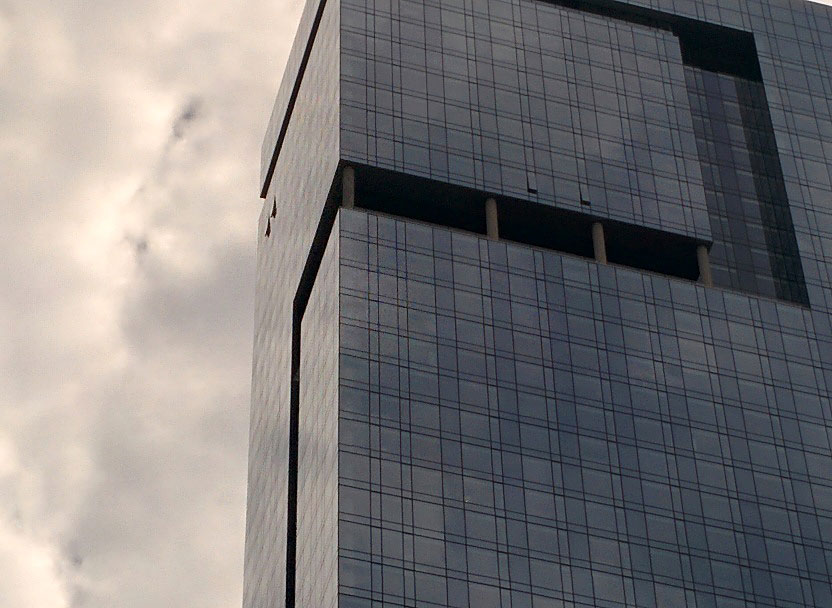 Then the boat slowly turned north as our guide announced, “Now we’re heading into the North Branch of the Chicago River…” 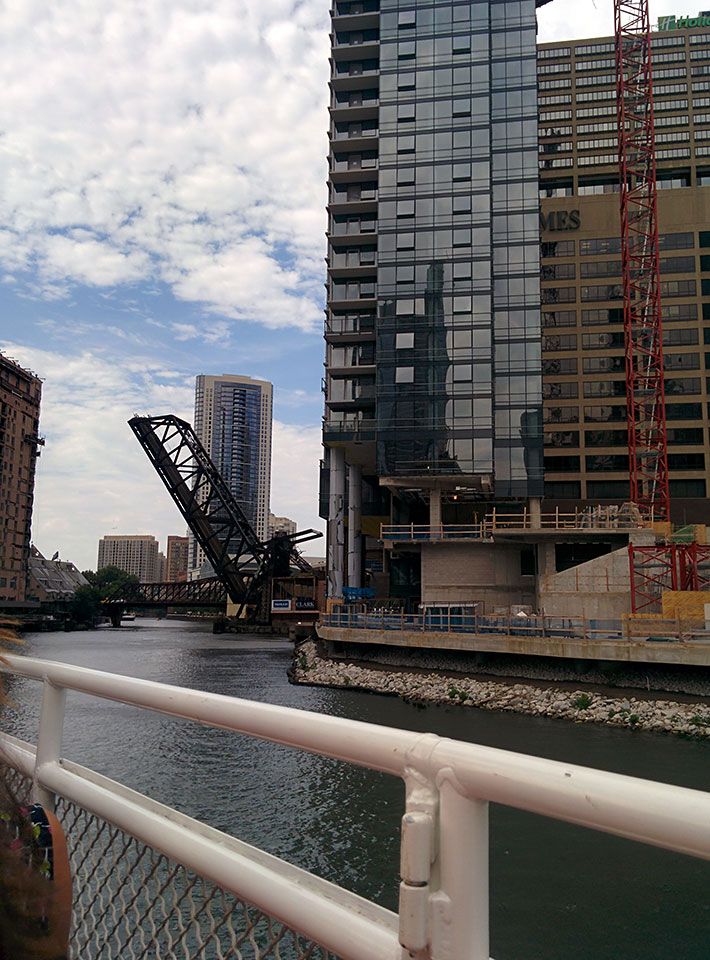 This immediately made me think: Sewers!

The North Branch of the Chicago River is where Wilmette’s westside storm sewers discharge. It’s also where Wilmette’s domestic sewage flows, after it’s been treated at the Northside Water Reclamation Plant. In a way, I was taking a tour of the very stuff I’ve been blogging about for the past couple months.

I was mulling this over (and wondering if my sewer obsession had gone too far) when I tuned back in to the tour, just in time to catch this joke:

You know, back in the early days, Chicago had a terrible problem. The city dumped everything it didn’t want [like sewage] into the river, and it all flowed into the lake, contaminating the water supply, and making people sick.

But they managed to solve this problem in the 1890s, through an amazing feat of engineering: They reversed the Chicago River, and sent it all to St Louis!

The guide paused a beat, then added:

Down in St Louis, they knew just what to do with it…
They made it into beer and shipped it back to us!

The Beer in the Morning Problem

I’m starting to think of stormwater and sewer management as the “beer in the morning” problem. Day-to-day, we hardly notice the water around us. But water is a fluid resource, flowing through many locales, cycling through many functions. So the reality is that the beer we drink at night, may actually become the water we drink–or swim in, or sail through–on another day.

To be truthful, during the river cruise, depending on the wind direction, you could catch a light whiff confirming that, yes, we were on the downstream end of the northshore sewers. But I’m optimistic that things are on an upswing.

Three big changes are finally coming together, 67 years after the first Clean Water Act, and largely in response to mandates from the Environmental Protection Agency.

First, the MWRD has continued to make progress on the Tunnel and Reservoir Plan. Instead of allowing combined sewer overflows to dump sewage directly into the rivers and lake, the overflows are starting to be diverted to storage, for treatment at reclamation plants, once storms subside. The Thornton Reservoir is almost ready to come online, and the entire TARP infrastructure will be completed by 2029.

Second, some big news! Instead of sending minimally treated sewage down the river, some Chicagoland wastewater will actually be purified before it’s discharged! For the first time–ever–in the history of Chicago, the rivers will not be treated simply as unusable, open sewers.

The first Chicagoland sewage purification system came online in July, at the Calumet Water Reclamation Plant. Along with the standard treatment (screening, filtering, settling, aerating), an additional chlorination/dechlorination process has been added to kill bacteria and make the discharged water swimmable. The Northside Water Reclamation Plant, where Wilmette’s sewage is treated, is currently constructing an ultraviolet purification system, to be completed in 2016.

Riding this wave of progress, Chicago is constructing a beautiful riverside, river-level walkway, opening up pedestrian access to the Chicago River at the center of the city. When finished, the Chicago Riverwalk will extend from State Street (near Lake Michigan) to Lake Street. 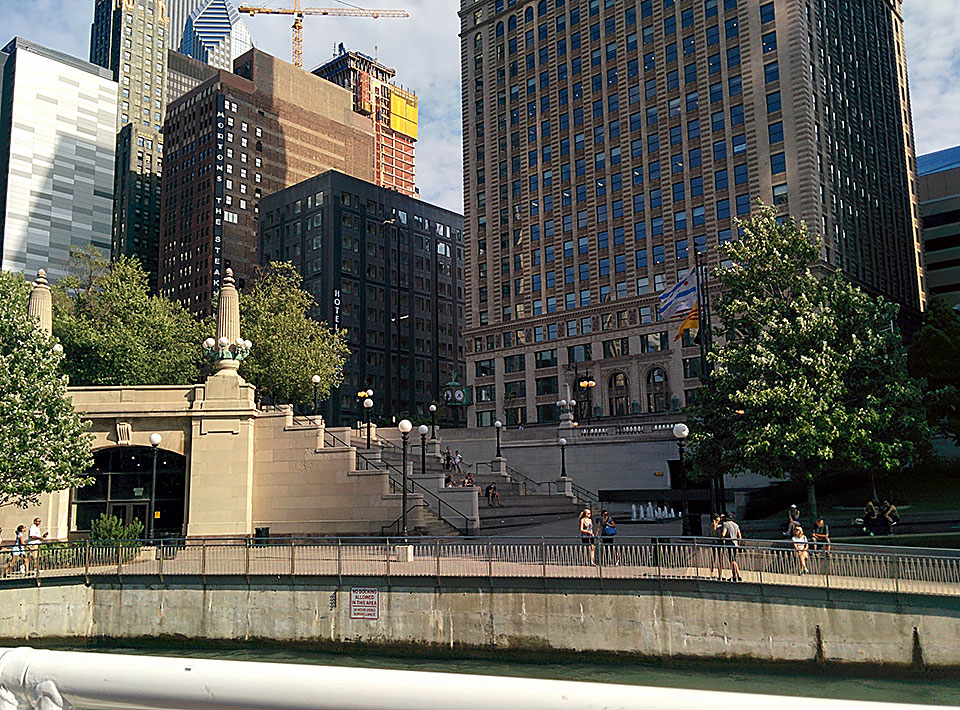 As we walked home from our tour, we had a little time to enjoy the new space, which already includes an outdoor music performance space, kayak rentals,pubs, and a river museum. 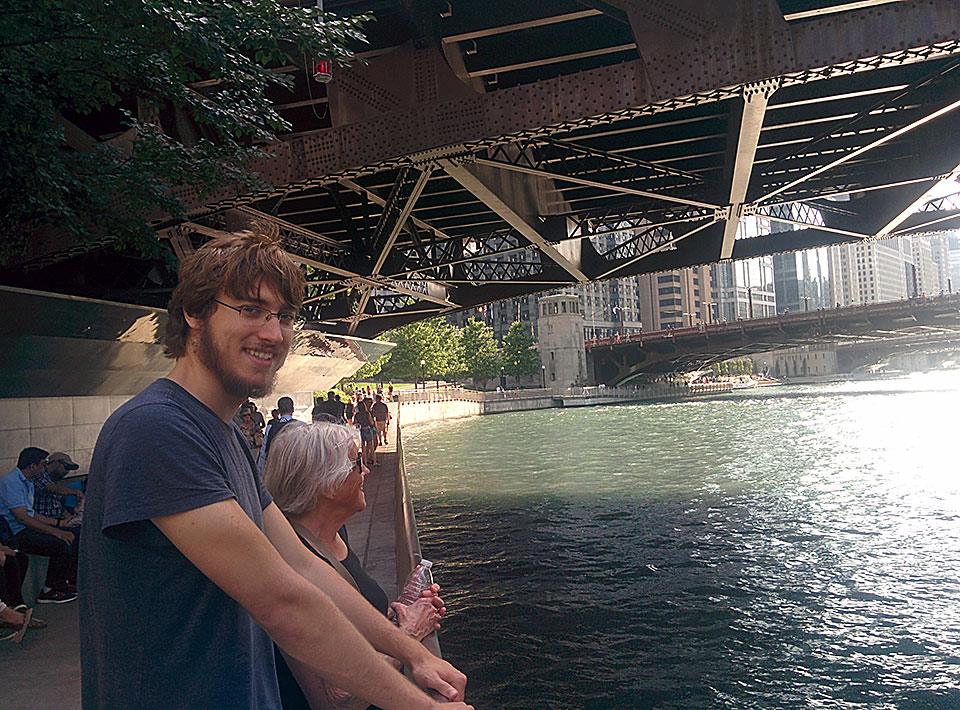 It’s also simply a beautiful place to enjoy a summer afternoon along the river’s edge. 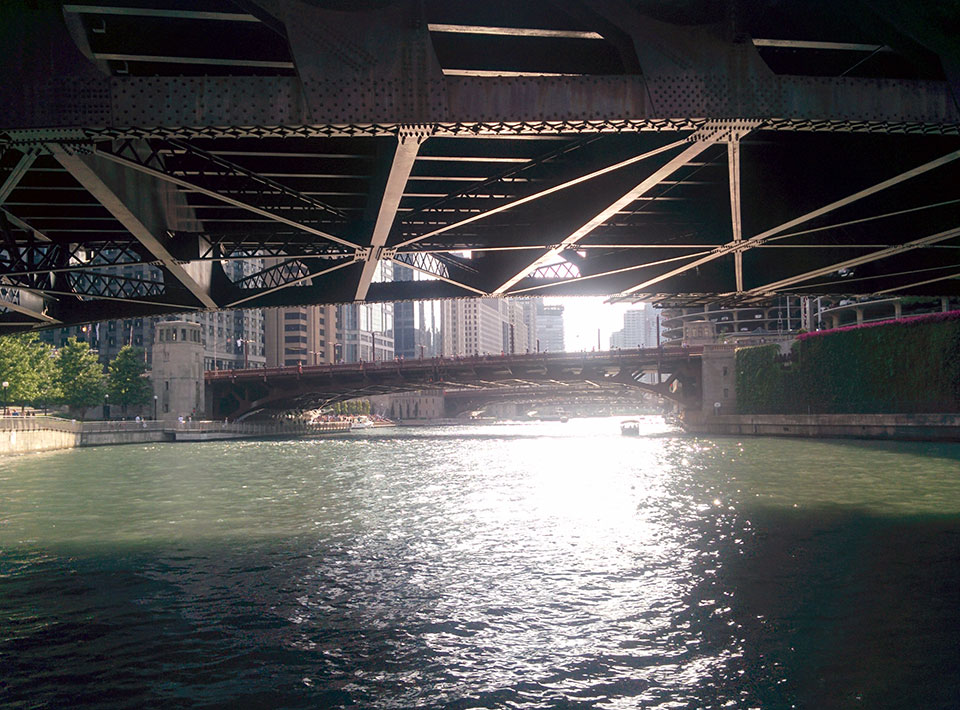 Find out more about the Calumet wastewater purification system.

Read about a glitch during construction of the new purification system for the Northside Water Reclamation Plant.

Get the details on the MWRD Watershed Management Ordinance, mandating standards for stormwater detention, runoff prevention, and wetland management.