Thanks to everyone who attended the Wilmette Village Board Special Meeting on the westside storm sewers last night, April 17. After more than five years of public events, and even without a storm in the forecast, we still had excellent turnout. Option 1 supporters at the meeting overwhelmingly outnumbered opponents (with 10 or 15 times as much support as opposition).

I especially want to thank the many eloquent speakers who so ably represented the ongoing financial and health issues caused by frequent flooding on the westside. I also want to thank the “core team” who worked with me to advocate for stormwater management solutions.

Despite our best efforts, the results last night were disappointing.

The board voted 5 to 1 in favor of Option 3 Neighborhood Storage. This option would install three underground tanks in three parks (Hibbard, Community Playfields, and Thornwood). During a 10-year storm, the tanks would store 30 acre feet (10 million gallons) of excess runoff, reducing the roughly 50-55 acre feet (16-17 million gallons) currently flooding the westside during 10-year storms. 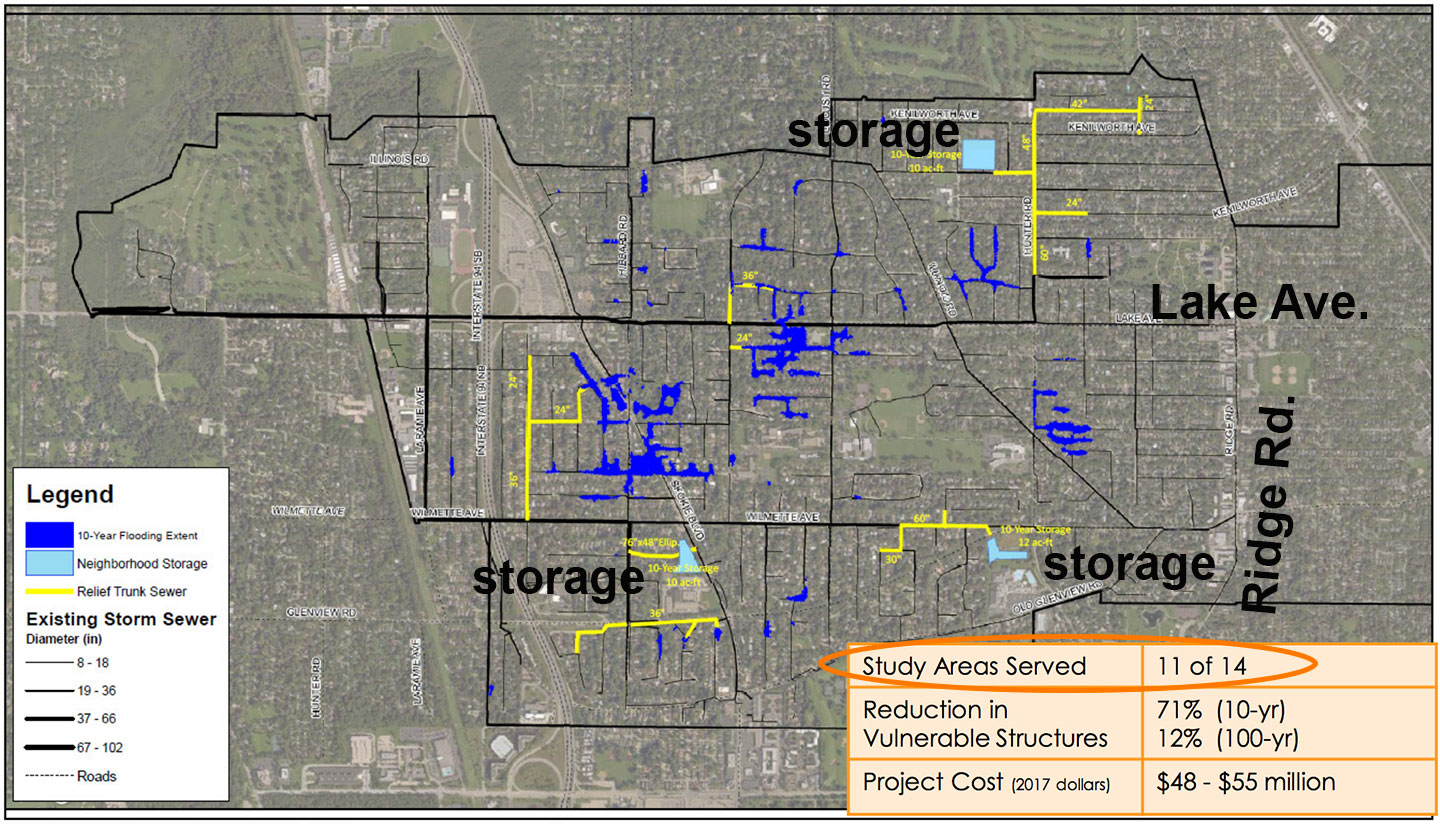 To their credit, board members universally agreed that Option 1 Storm Sewer Expansion was the “best engineering solution,” but they deemed it too expensive. (See details and maps for the final three options.)

It’s cheap, that is, in terms of the initial cost. However, implementing Option 3 Neighborhood Storage means that many westside areas are left out of any service improvement, and during storms greater than 10-year intensity, once the tanks fill, there is no additional benefit for anyone.

Based on the studies, the only way to achieve standard 10-year storm protection (or better) is to install more and bigger pipes, flowing into the key component: a new storm trunk connecting to the pump station on the Chicago River. In other words, to improve service on the entire westside, you’d have to add Option 1. (The westside doesn’t have enough undeveloped space to store 17 million gallons of runoff.)

Last night was a familiar scenario, with the board verbally pummeling both staff and engineering consultants to obtain favorable characterizations or silence. Trustee Joel Kurzman, the sole “no” vote on Option 3, remained the only steadfast supporter of Option 1.

While the board was right to place sewer expenditures in context of total village spending and to react to concerns about cost, they did so by obscuring the reality of separate sewer infrastructure funding (using sewer fees), and without comparison to increases expected based on inflation, or to the costs of doing nothing. That job was left to residents, who voiced frustration with property devaluation caused by flooding.

Thanks to Trustee Joel Kurzman

Joel started the Dry Out Westside Wilmette Facebook group, which I took over and renamed Advocates for Wilmette Stormwater Management (AWSM). We owe him tremendous gratitude for his integrity and work ethic. During last night’s meeting, he continued to advocate for providing the same level of infrastructure service for the entire village, and he clarified the reasons why the westside separated sewer is the modern ecologically sound system–if it’s maintained and sized correctly.

The results of the final storm sewer meeting appeared to have been pre-planned, so for the most part, there was nothing new. Green infrastructure will still be part of the project. The board promised to continue “studying” the issues.

One shocker though was that the Village Board, despite having considered, rejected, and then reconsidered Neighborhood Storage, had not yet obtained Park District approval for installing tanks in the parks. In fact, a brief informal consultation right before last night’s meeting appeared to be the only contact with the Park District on the matter.

There was also a mention of installing some larger pipes in some neighborhoods–perhaps in the hope that a future board would install the storm trunk? But no details were available, and since engineers have repeatedly said that conveyance installation must start at the downstream end, I have no idea how (or if) this idea would work.

Again, I want to thank everyone who helped Option 1 win every informal poll, email campaign, and public speaking event.

Going forward, there are a few minor things you can do:

FLOODING: Share information about flood control solutions and flood control vendors with friends and neighbors. During and immediately after each flood, document issues with photos, videos, and notes to support any claims for damages.

DEVELOPMENT: You can monitor development in your neighborhood and respond to requests for variances that would decrease permeable land in your neighborhood. Also, periodically check Village of Wilmette meeting packets and announcements to find out about development that may add to the westside storm sewer burden. The Land Use Committee, Building Code Board of Appeals, Plan Commission, and Zoning Board of Appeals are places to start.

RAINREADY: If Trustee Julie Wolf follows through on her idea of starting a RainReady program, with the Center for Neighborhood Technology, consider a consult with them on your house. Many of their programs (like home rain gardens) are only effective for rainfall of less than 1 inch, but a consult could still be helpful to figure out what you can do with your existing situation.

QUESTIONS: If you have questions about Option 3 or related to stormwater, contact the village board or Brigitte Berger, Engineering & Public Works Director (bergerb@wilmette.com at 847-853-7627).

SERVING: If you discovered an affinity for public speaking or civic problem solving during stormwater advocacy, consider serving on the Wilmette Village Board. I’m sure Joel Kurzman would be happy to help you understand what’s involved.

ADVICE: Today, the results still seem very disappointing. However, once I’ve had time to take a break and get more perspective, I’ll try to review what did–or did not–work in our efforts to reduce frequent flooding. Contact me and I’ll be happy to share what I learned with anyone facing the same flooding and sewer issues.