In June, a meeting of the Wilmette Village Board featured a “value engineering” study of the proposed Storm Sewer Improvement project.

In preparing for the meeting, I decided it was important to counterbalance the estimated cost for the proposed improvements, with the estimated cost of continued westside flooding, something that I’ve yet to see quantified in a comprehensive way.

After the meeting, several people asked me to explain the basis for my calculations, so here it is, with a few minor tweaks and “what ifs” to consider.

All my estimates are based on data from the Village of Wilmette, engineering studies paid for by Wilmette, the RainReady program of the Center for Neighborhood Technology, the US census, and Zillow.

For the board meeting, I made calculations using low-end numbers, to provide a base estimate of monetary losses due to westside flooding. Realistically, flood costs are probably much higher than what I reported at the meeting.

STEP ONE: Typical Cost of Flooding
First, I found the average payout for flood insurance and disaster relief claims filed by Cook County property owners. Based on CNT data, it looks like typical payouts range from $9,047 to $16,505: 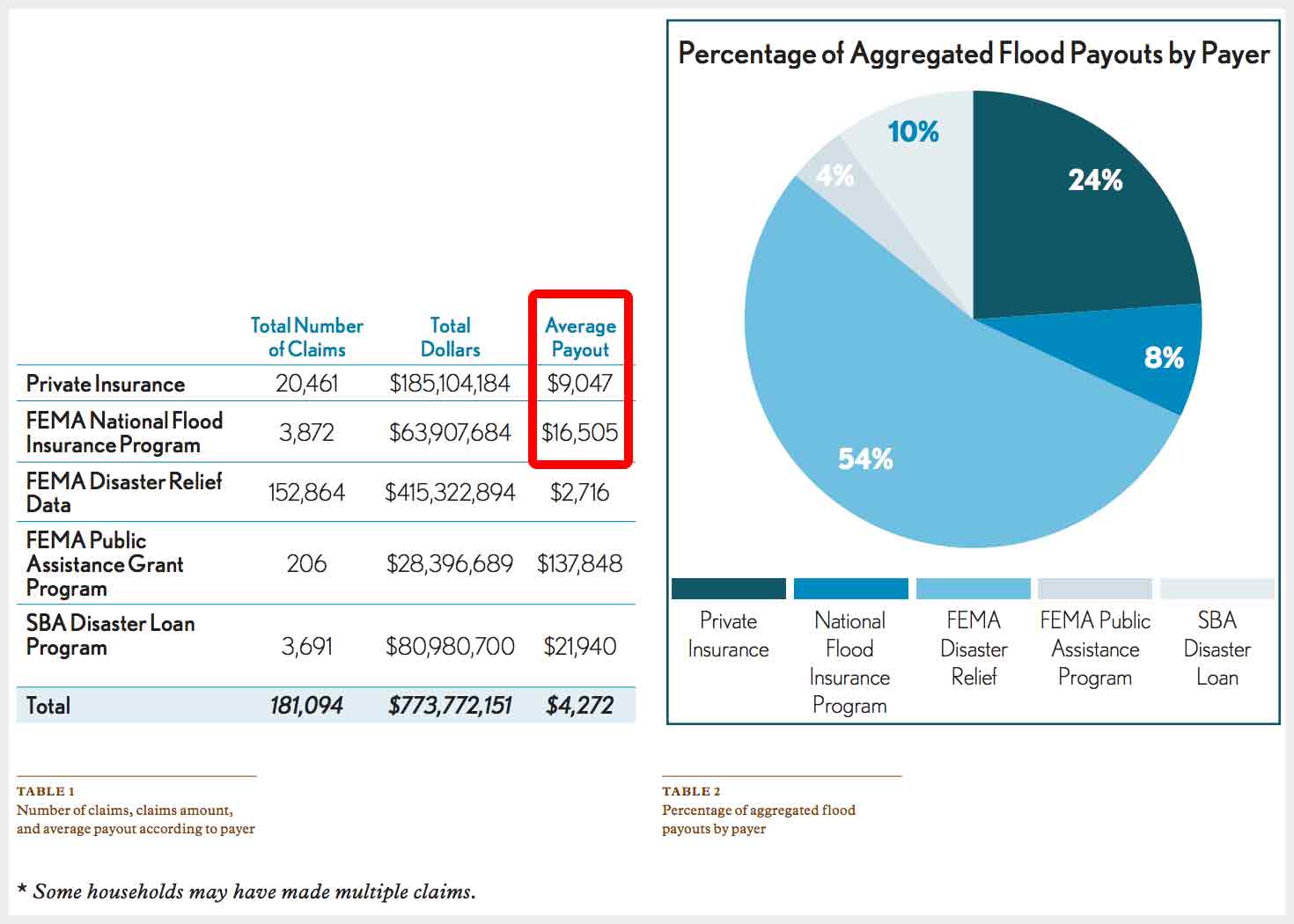 I also found a CNT survey of Cook County residents that attempts to identify the full range of flooding issues. No surprise–flooding can be stressful and unhealthy! Flooding also typically leads to a combination of structural damage, property loss, and loss of work time, resulting in a combined total of up to $30,661 in damages.

To be conservative, I decided to base my westside flooding costs on a low-end number: $7,769 which is the average cost of structural damage per flood. 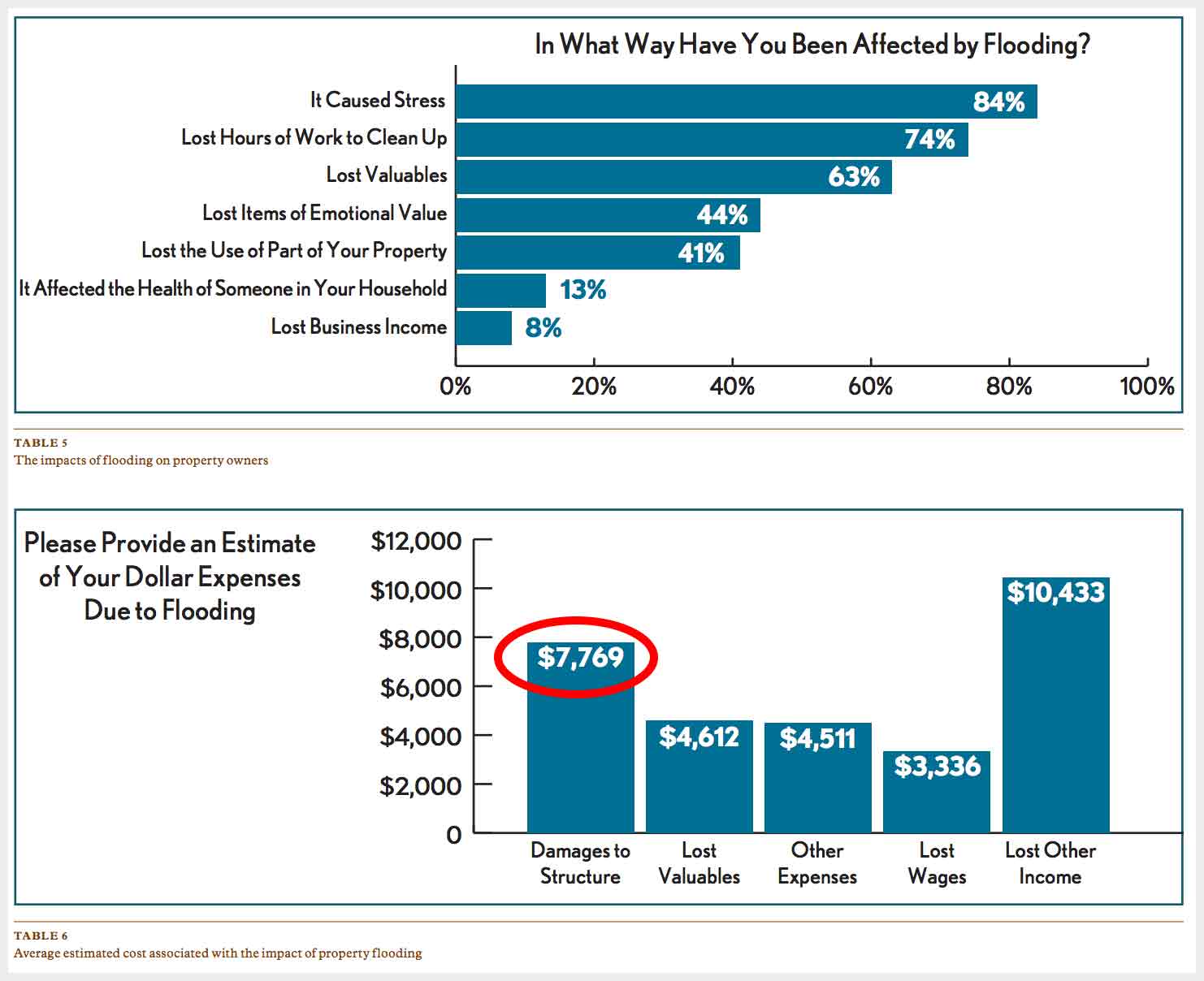 STEP TWO: Impacted Properties Based on Storm Severity
In the June sewer meeting packet, I found the number of westside Wilmette properties expected to be damaged at each storm intensity.

The numbers are based on Burke Engineering models (described in the 2015 study), which incorporate hydraulics (existing sewer pipes), hydrologic (rainfall) data, permeable ground area, and elevations. Burke also matched residents’ flood reports to the models, confirming validity of the data. Predictably, the more severe the storm, the more structures are impacted:

STEP THREE: Our Recent Storm History, Based on Storm Severity
I used Wilmette Water Plant stats on rainstorms to determine how many storms, at each intensity level, Wilmette has experienced over the past three decades:

Just to establish a more complete range of estimated flood damages, I decided to repeat the calculations, using a higher value for damages: $15,000 which is still within reported ranges. 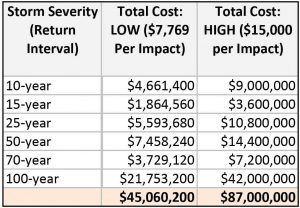 In conclusion, westsiders have probably suffered somewhere between $45M to $87M in flood damages over the past three and half decades.

In addition to the immediate damages from each storm event, there’s also a long-term impact on property values.

According to the CNT case study (The Prevalence and Cost, p 24), homes that experience basement flooding lose 10 to 25 percent of their value.

To calculate the total impact on westside property values, I went to Zillow and looked for the low end of home sale prices on the westside, and came up with $309,746. However, since then, I’ve located the Median Wilmette Home Value, reported in the US Census Quick Facts for 2015, which was $629,000.

Next, I multiplied the low and median home values by 700 (total impacted homes) to get total affected property value, then calculated a 10 and 25 percent loss:

At the June meeting, I reported on my low-end estimate of property devaluation. But the actual impact of flooding on westside property values is likely to be somewhere in between $21M to $110M.

As usual, investigation leads to more “ah ha” moments, as well as some head scratching.