Among the Seven Wonders of the Ancient World, Egypt has the Great Pyramid of Giza, Greece has the Temple of Artemis. And Chicago…?

We have the Chicago Sanitary and Ship Canal, once considered to be one of the Seven Wonders of American Engineering.

Here’s the section of the system located in Wilmette’s backyard: 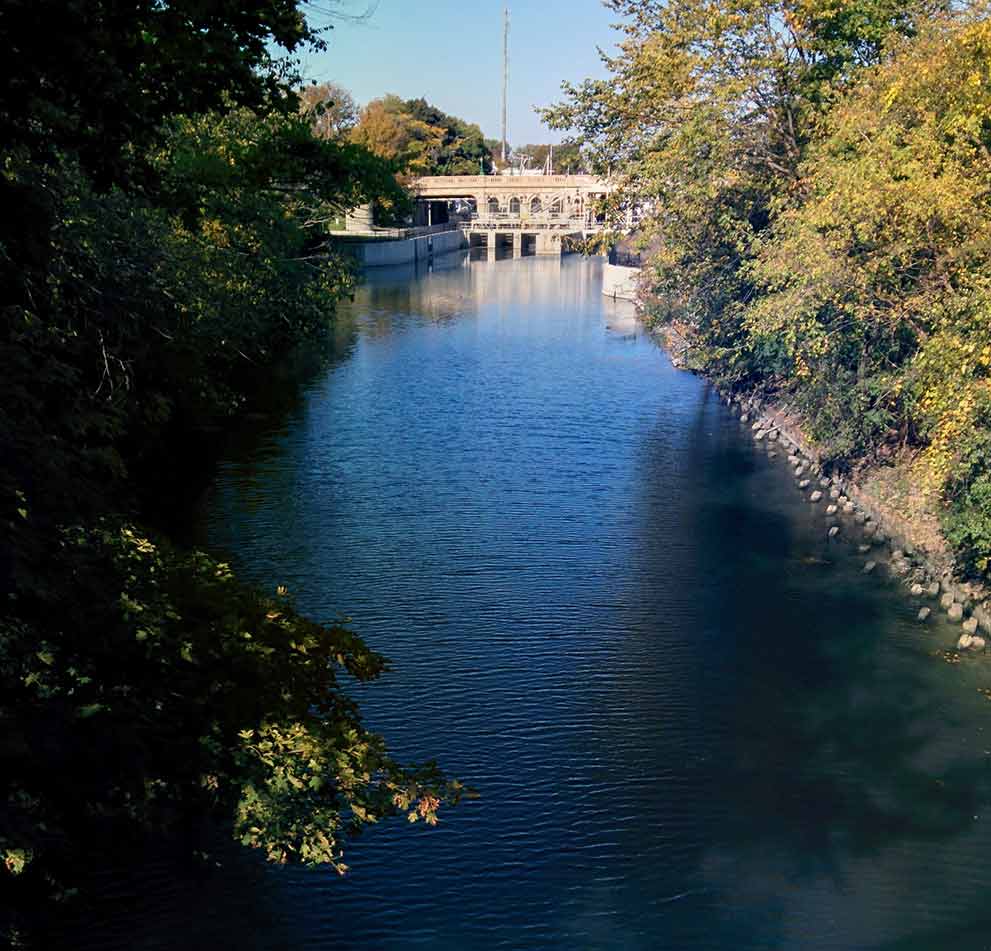 The North Shore Channel, looking from the Linden Ave bridge north toward the Wilmette Pumping Station and locks.

Admittedly, it’s not a glamorous tourist attraction! After all, the sanitary canal system was designed to connect shipping routes from the Great Lakes to the Gulf of Mexico, and also to function as–well, basically, as an open sewer.

Recently, however, I stumbled across some old pictures posted by the Metropolitan Water Reclamation District of Greater Chicago showing construction of the early sanitary canal system, and I found myself drawn into a long-gone world.

For example, here’s a view similar to the top photo, but from 100 years ago: 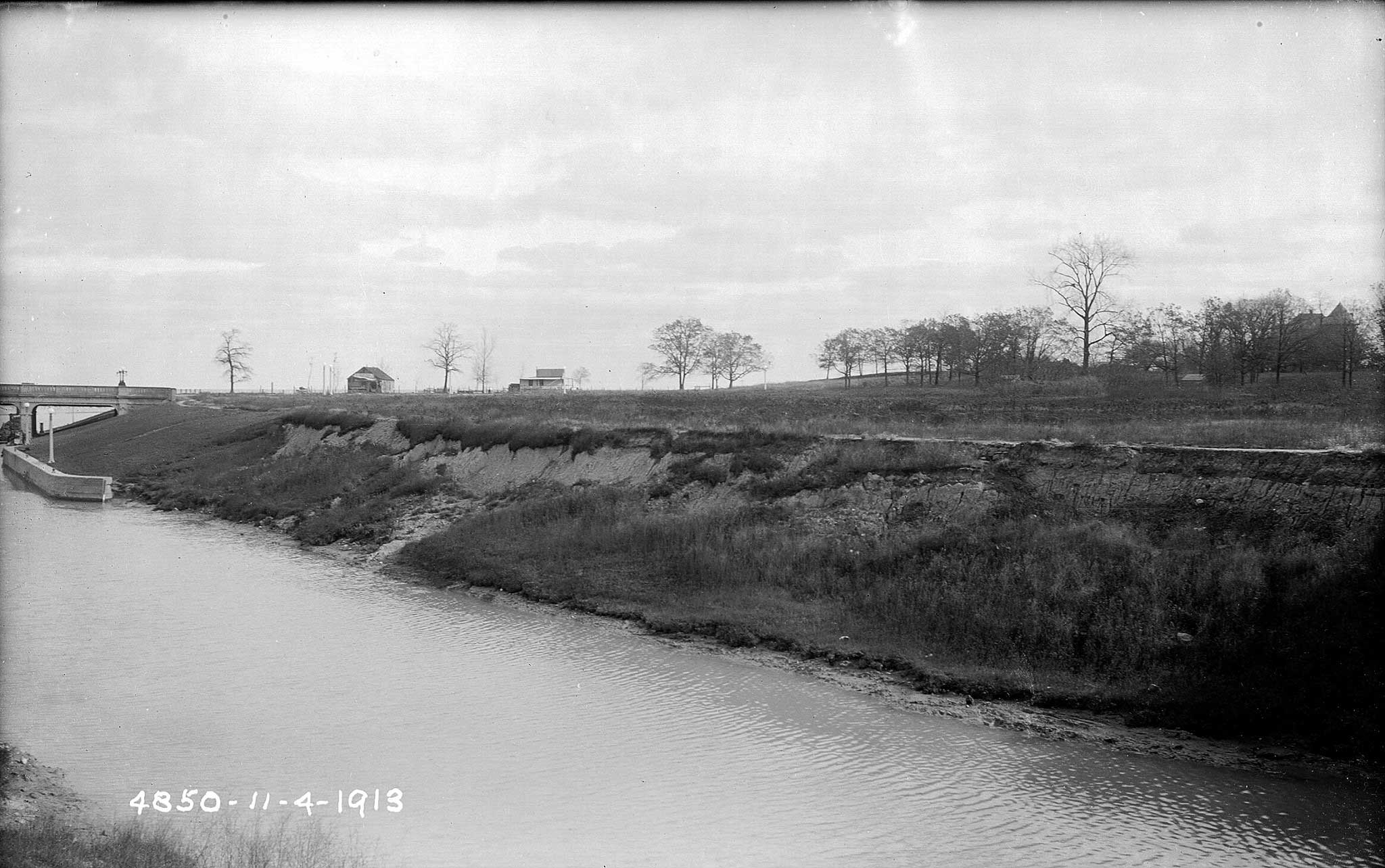 The east bank of the North Shore Channel in Wilmette between Linden Avenue and the Wilmette Pumping Station … November 4, 1913. This area is now home to the Baha’i House of Worship. Posted by MWRD, October 9, 2014

The MWRD photos reveal the project’s enormous engineering challenges, and the amazing equipment and construction techniques developed to solve them: 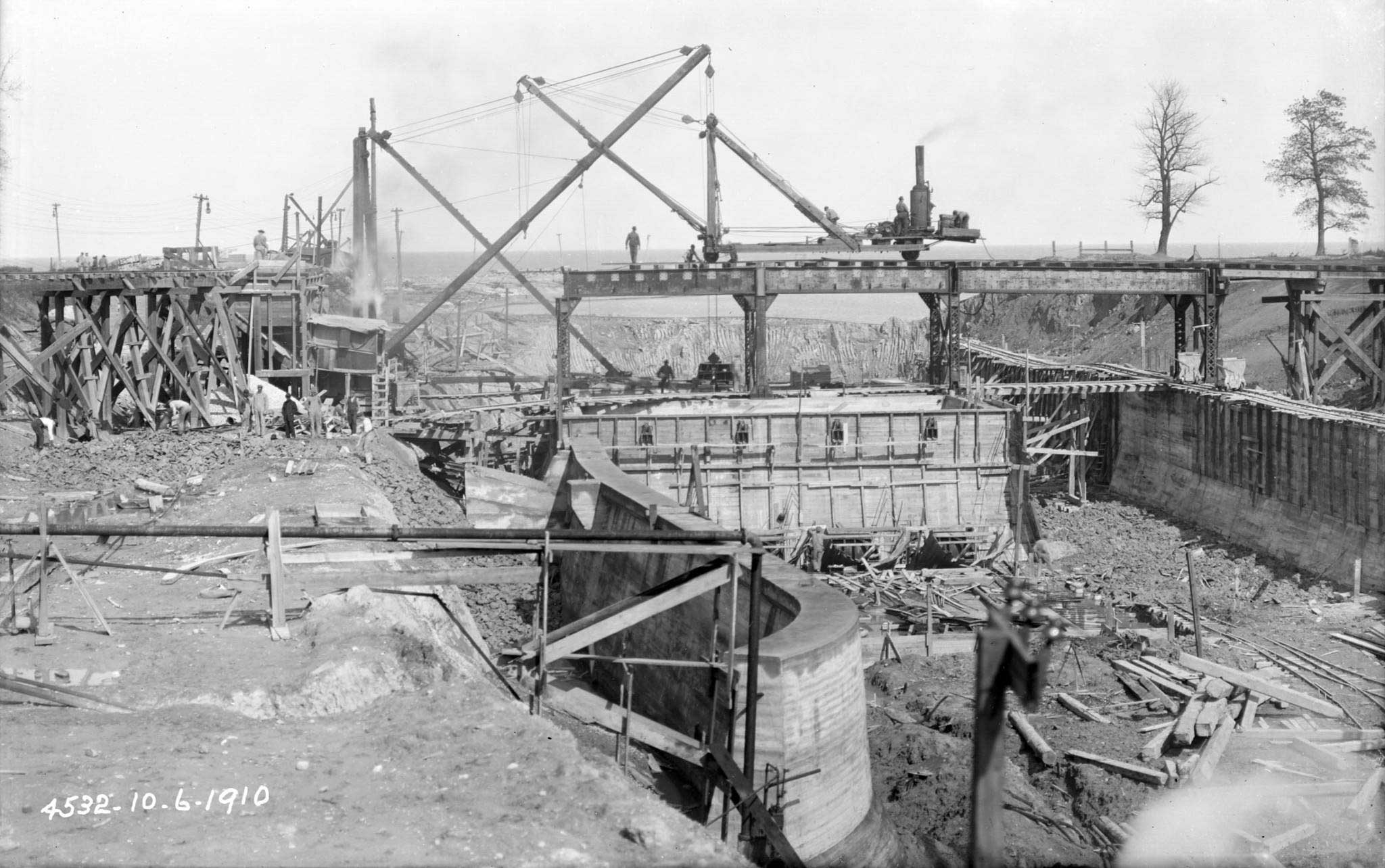 Wilmette Pumping Station construction on Oct. 6, 1910. Wilmette Harbor and Lake Michigan are in the background in this view looking east. Posted by MWRD, April 9, 2014

Yet the most striking feature of these old photos is the human scale. Tiny figures dot the backgrounds of colossal excavation sites: 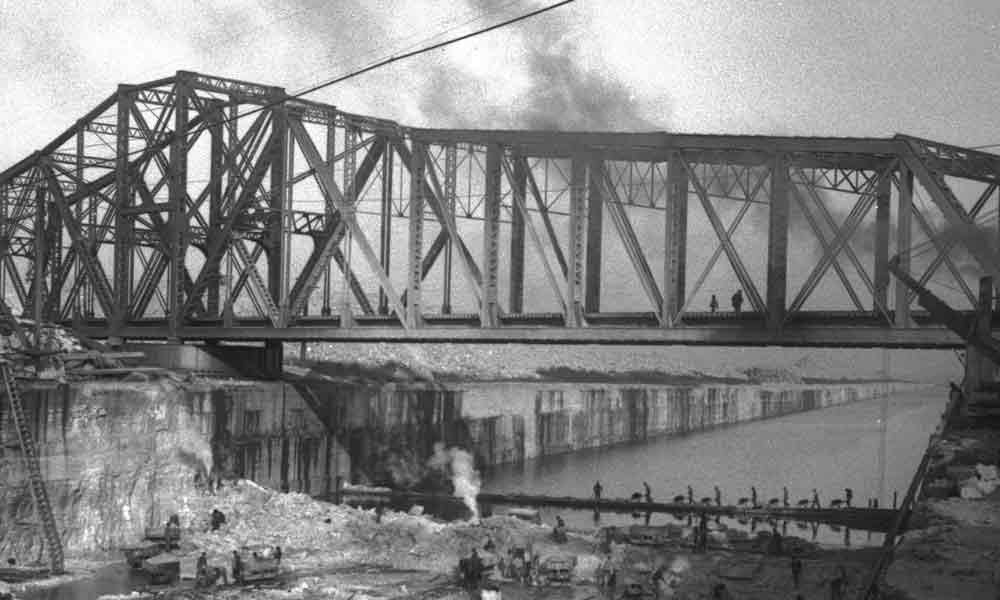 A line of workers are seen moving material during the construction of the Chicago Sanitary and Ship Canal on November 20, 1899. Posted by MWRD, July 18, 2012 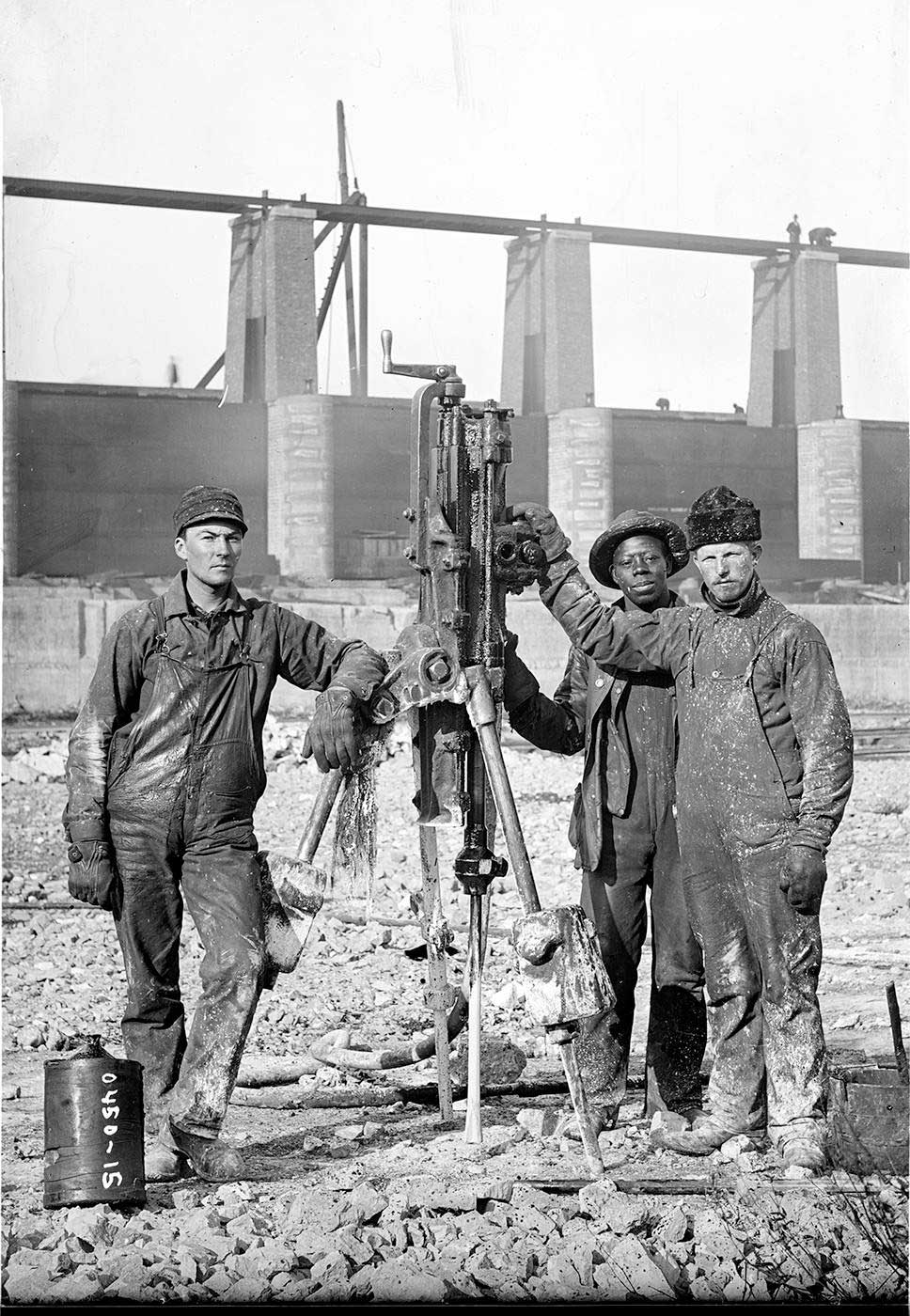 …three laborers posing next to a compressed air rock drill … the nearly completed sluice gates for the Lockport Controlling Works can be seen in the background…November, 1896… Posted by MWRD, March 5, 2014

Motivation for a Monumental Project

The main sanitary canal was built between September 1892 and January 1900, in response to a persistent public health crisis.

By the mid 1800s, cholera and typhoid fever killed hundreds of people each year in Chicago. These diseases were endemic because Lake Michigan served as both a public water supply, and a sewer. 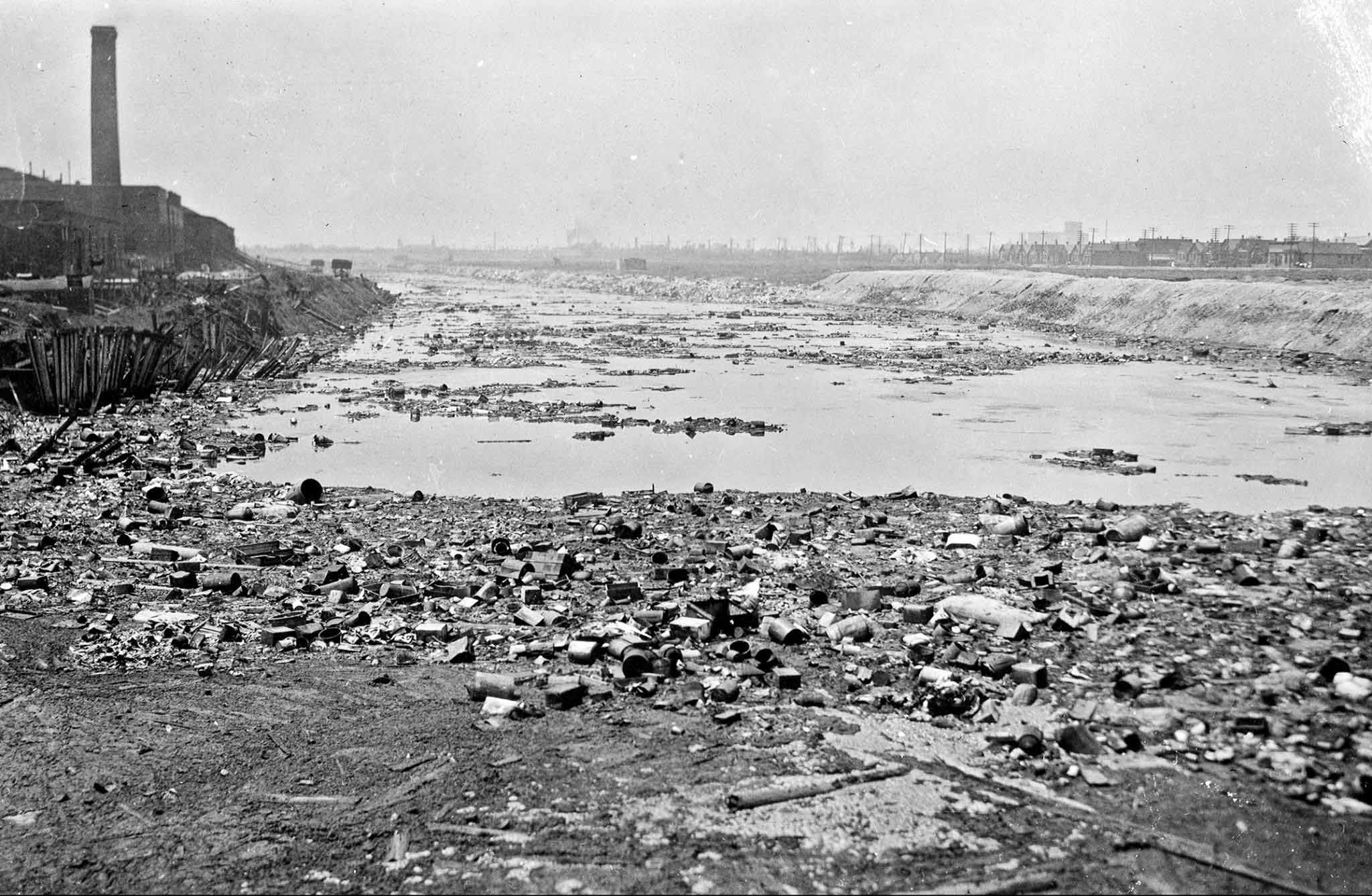 Raw sewage and pretty much any other pollutant you might imagine were being dumped directly into the lake and into the Chicago River, which flowed east into the lake. Chicago constructed water intake cribs offshore, to avoid the contaminated water, but without modern water purification systems, people still became sick.

In 1887, engineers proposed a solution to the Commission on Drainage and Water Supply, appointed by the Chicago City Council. The plan was to reverse the flow of the Chicago River (a feat already accomplished on a smaller scale for the I&M Canal) and send the sewage west, away from the lake. 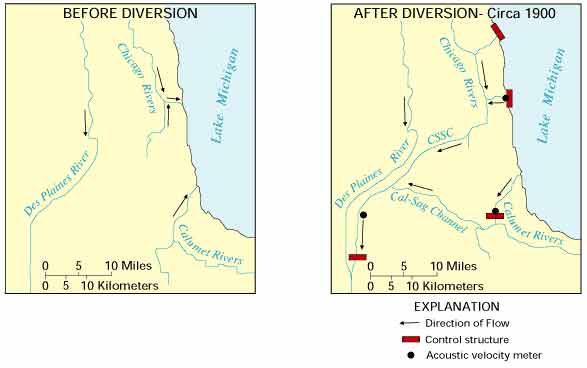 Chicago’s sewage would flow through the Des Plaines and Illinois Rivers, and ultimately discharge into the Mississippi. Problem solved! (For Chicago at least…)

To carry out this monumental plan, the Illinois legislature created a new organization, called the Chicago Sanitary District (precursor to the MWRD). Multiple engineers were appointed to manage the project, among them Isham Randolph, who proved the most able to solve engineering puzzles and keep the project moving.

Lucky for us, the Sanitary District also hired official photographers to document the work–at that time, the most ambitious project in the history of wastewater! 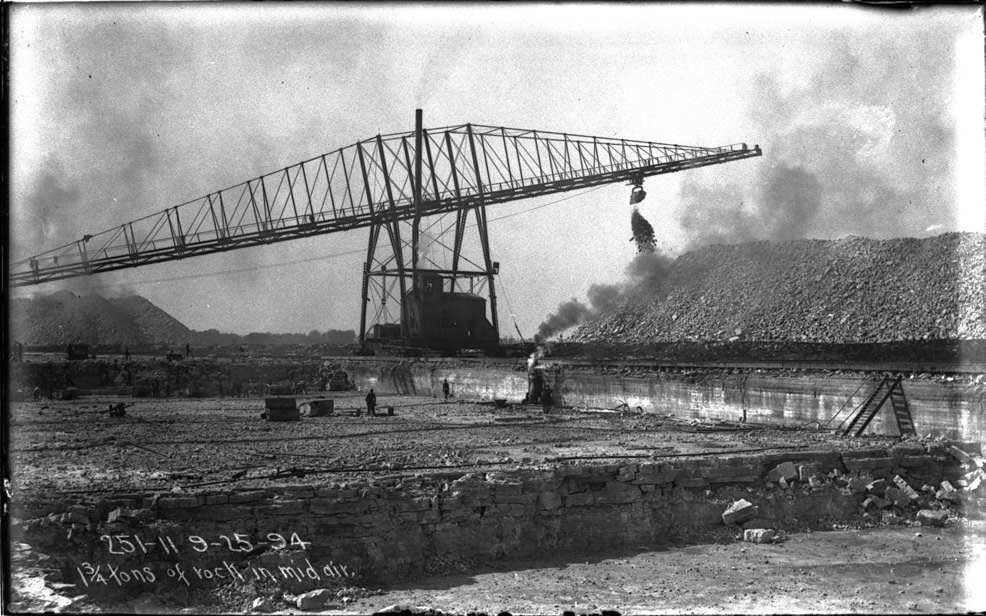 Chicago Sanitary & Ship Canal construction in 1894: An incline conveyor throws “1 3/4 tons of rock in mid-air” from the canal to spoil piles. Posted by MWRD, September 12, 2012

After the main canal was completed, the Sanitary District added an extension that included locks and a hydroelectric power plant, called the Lockport Powerhouse: 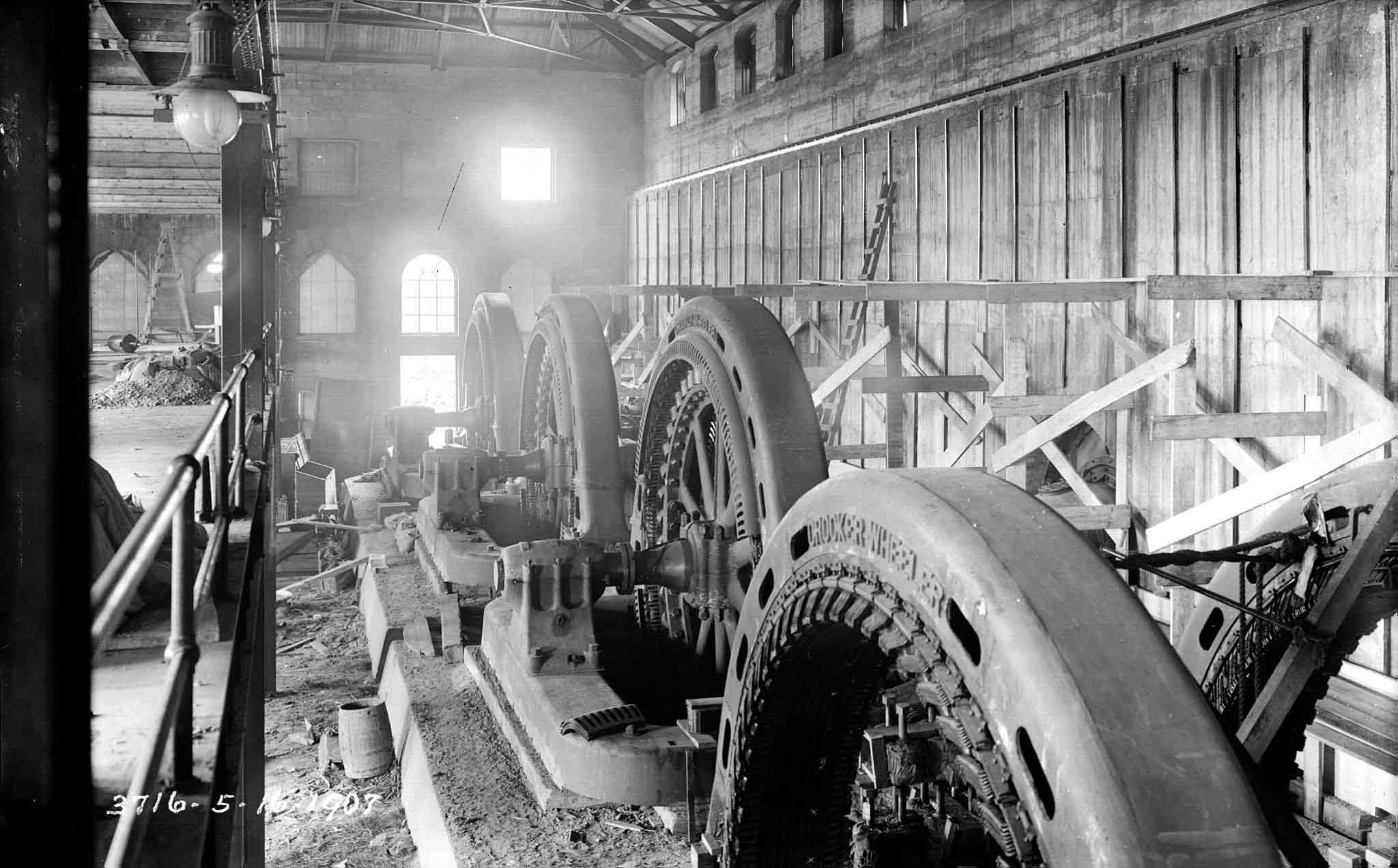 A view of the interior of the Lockport Powerhouse during construction on May 16, 1907, showing the installation of the horizontal generators…Posted by MWRD, June 11, 2014

Investors must have loved that–a system built to manage a stream of effluent also generated a revenue stream! And it still generates electric power today.

After the main canal was completed, the North Shore Channel was added. The pumping station and locks at the north end (by Sheridan Road) were designed to pump in lake water, which would flush sewage through the canal system (like flushing an enormous toilet…ugh!): 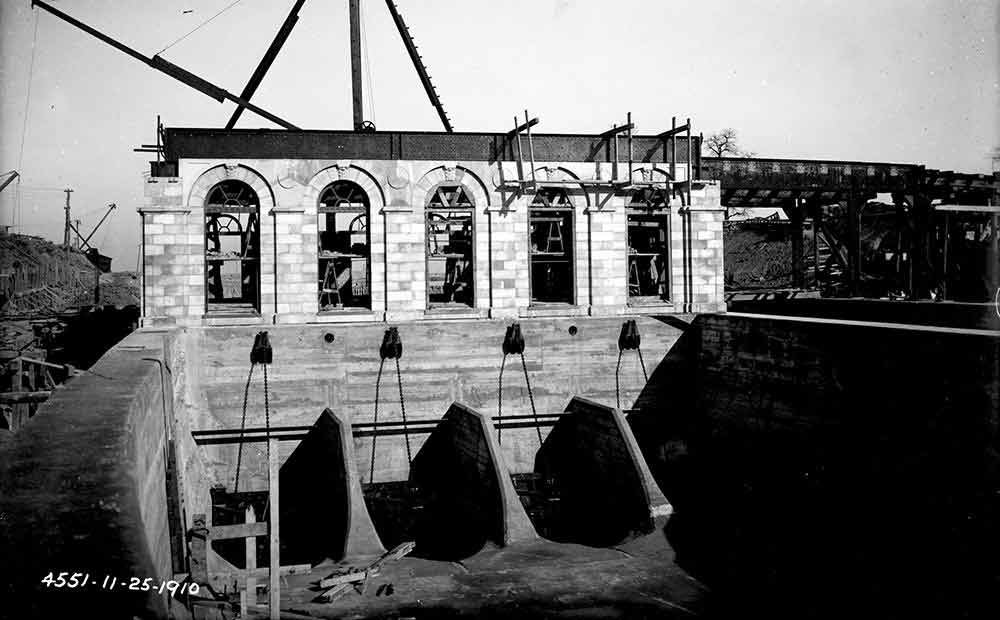 The Wilmette locks also served as a “release valve” during storms; opening the locks drained excess sewage and stormwater out to the lake. (Today, the system still functions, and still pollutes the lake, during combined sewer overflows.)

Missouri filed a lawsuit to try to block Chicago from sending sewage downriver, but the lawsuit failed.

Almost two decades passed before a water treatment plant was added to process sewage from northern Chicago and the North Shore: 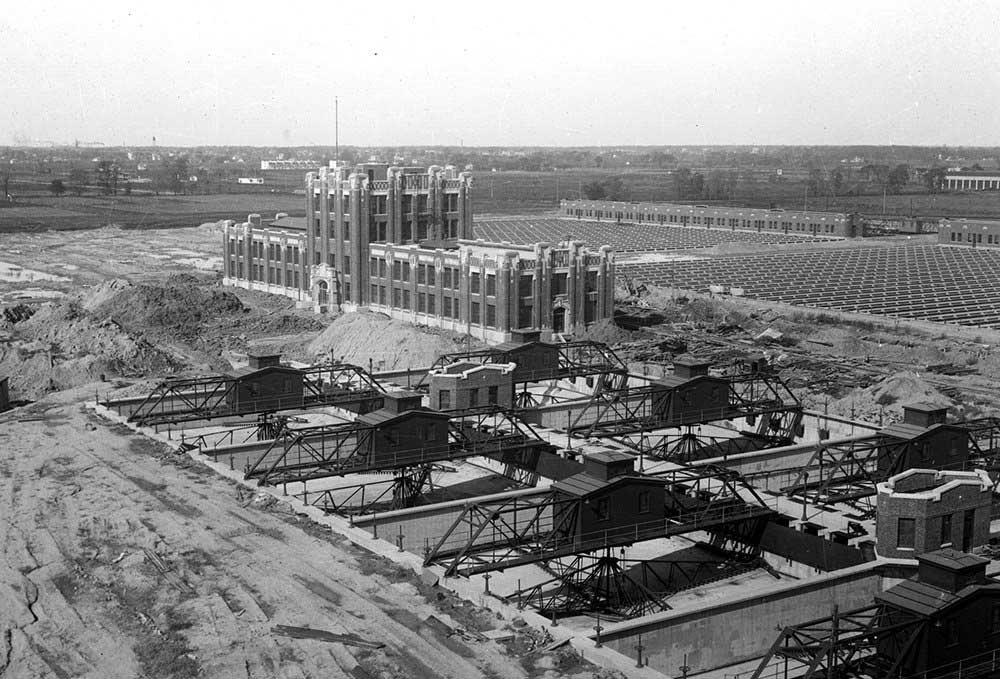 Nobody would design a sewage treatment plant to look that grand today! On the other hand, the plant relied on a minimal treatment process (filtering, settling, and aeration) to reduce microbes, and is only recently being retrofitted with an ultraviolet purification process. By 2016, wastewater discharged from the plant into the sanitary canal will be “swimmable.”

While researching our sewers, I’ve often been baffled or even disgusted by past decisions. It’s easy to feel like we’ve been left with a mess, created by past generations.

But looking at the old MWRD photos made me realize that our infrastructure was built more than a century ago, using the best knowledge and technology of the time, within the social and political constraints of the time. 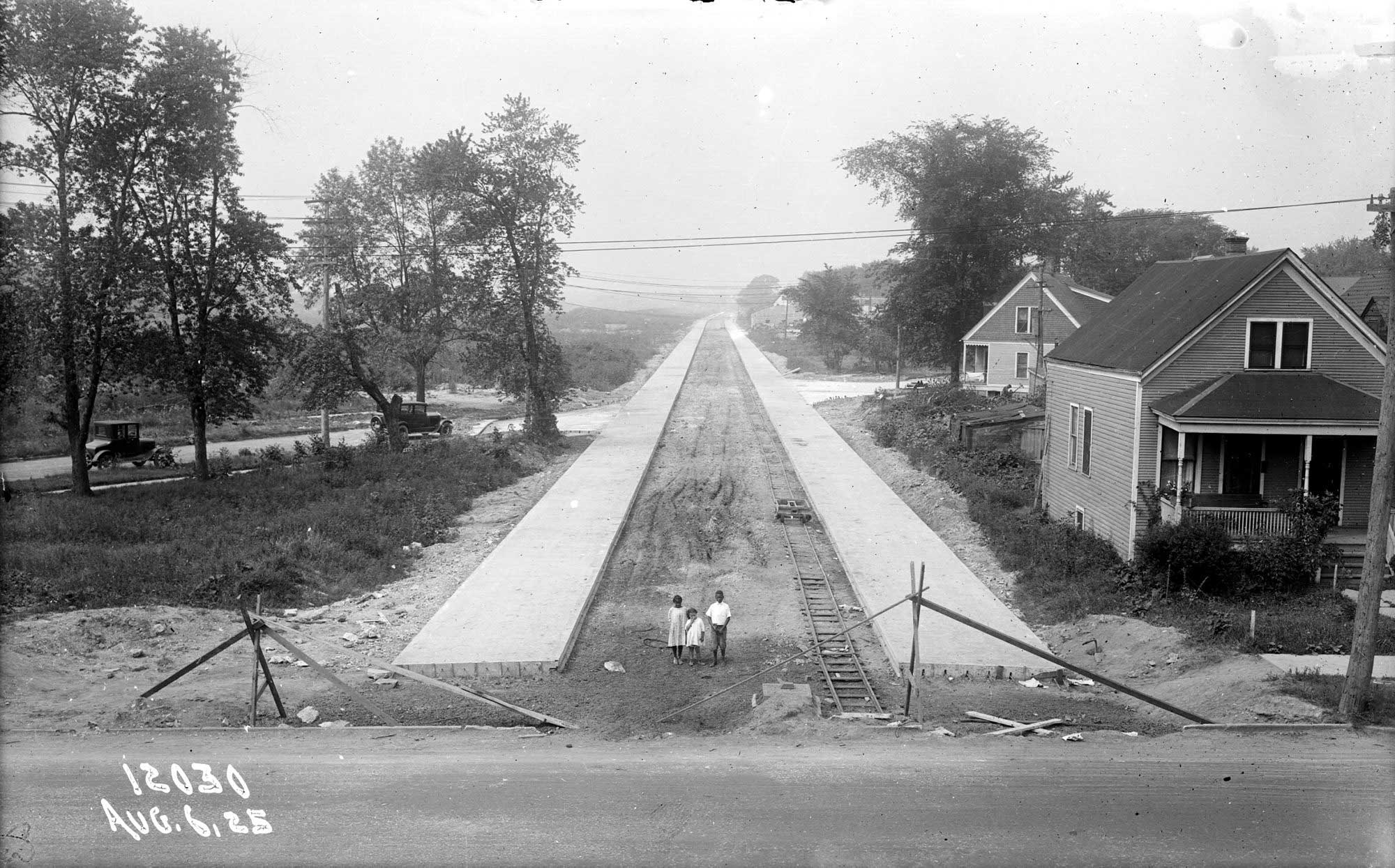 View looking southwest at the partially completed, northernmost section of McCormick Blvd…. named in honor of Colonel Robert Rutherford McCormick, who was the Sanitary District’s President during construction of the North Shore Channel. Posted by MWRD, November 13, 2013

Browse through the rest of the approximately 150 MWRD Historical Photos. The images are digital scans of some of the 20,000 original glass plates.

Some of the many other fascinating photos include:

Find out about systems for modern wastewater treatment: