I’ve worked a couple of decades as an independent contractor for computer tech companies, so I’m familiar with tech consulting, in all its glorious forms.

Based on my experience, I would say the #1 Consulting Rule is: Get your clients hooked on your services, and keep them hooked!

There’s nothing inherently wrong with that, but some consultants take it too far. They push expensive software solutions that require their professional expertise, instead of promoting cheaper alternatives clients can use. Or they “archive” source material or limit access to their consulting process, instead of providing training and tools to help clients maintain progress, after the contract ends.

That’s why I was very surprised by a minor, but recurring, theme that I discovered while reviewing sewer studies for this blog…

Over and over, consulting engineers have defied the #1 Consulting Rule, and told the Village of Wilmette: Invest in a Geographic Information System (GIS), train staff to use it, and start tracking sewer information yourselves.

Not only that, but they’ve provided the village with some initial GIS databases to get started. 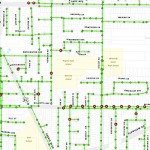 Storing information in a GIS database makes the data available for queries, analysis, tracking, and for output as a visual map.

I’m not an expert on the village or GIS technology, so I’ll simply report on what I’ve found in village documentation.

Here’s a statement by the Village of Wilmette on current information tracking for the combined sewer:

Based on this document and other research, it appears that Wilmette currently tracks information in three main formats:

These systems do not make data readily available for sophisticated analysis and problem solving.

For each Wilmette sewer study, consultants have had to invest a considerable chunk of time and money into creating GIS databases, in order to analyze particular sewer systems and flooding issues.

The scope of the SMR [Stormwater Management Report] includes the development of a digital storm sewer database developed in a Geographic Information System (GIS) database for the Village. The GIS database will serve as the central location for all of the information collected and developed as part or a result of this SMR. This SMR database has been developed with the intended use as a tool in the decisionmaking process for future capital improvements. The compilation of the GIS database is one of the main products resulting from the SMR …


Here is a statement by the RJN Group, regarding GIS implementation for the separate sanitary sewer: 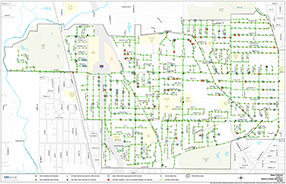 Ultimately, if a strong GIS is developed, it would be in the Village’s best interests to invest in GIS software and training so that the Village is able to use the full functionality of the GIS system. Future projects could incorporate other utilities into the GIS as well such as storm sewer, combined sewers, water, and traffic/transportation.

Beyond the engineering value of GIS, there’s also a communication component. In discussing this blog with friends and neighbors, I’ve discovered that many have been contacted by the village about sewer issues (such as flooding, sewage backups, and disconnecting downspouts from the sewers).

But although many have provided input, most seem unsure how the information was used, if at all. GIS would make it easier for the village to collect, communicate, and follow up on sewer issues.

Something else that caught my eye was a recommendation to hire student interns to kickstart GIS implementation, and help conduct community surveys. This seems like a great idea. Through my kids, I’ve discovered that Wilmette is the kind of place where junior high students write apps for spare cash, and high school grads get fulltime tech jobs for their “Gap Year.” So finding local students to help should be easy.

A hopeful sign is that the Village of Wilmette recently posted a job ad for village engineer, noting that a “basic knowledge of GIS systems is desired.”

I’m interested in finding out more about GIS, current village plans for GIS, and ideas on good solutions for Wilmette. If you care to comment, please use reply below. Thanks!